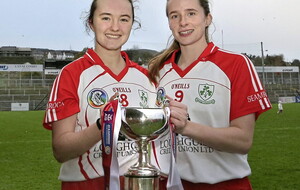 FOR the first time in seven years Loughgiel will play in an All-Ireland semi-final. It will be the club’s seventh semi-final and the Shamrocks’ supporters are still waiting on the opportunity to cheer on their camogie team in a final.

During the time that Loughgiel came through for their first provincial titles, there wasn’t much expectation that the Ulster champions would contest a final. In the 30 years prior to Rossa’s first appearance in the final in 2006, only Swatragh and Eglish had made it through semi-finals.

Rossa’s All-Ireland win in 2008 and particularly Slaughtneil’s three-in-a-row in the last few years have changed the mindset of the Ulster champions as they take on the semi-final challenge.

Loughgiel will go into this game believing that they too can reach the final – and they have every chance of doing so if they bring the work-rate and intensity of the Ulster final to the higher stage.

Their defence has been sound all year and were able to cope with Slaughtneil’s attacking bursts, although they conceded a number of frees to keep the Derry side in contention until the three quarters mark.

Amy Boyle and Lucia McNaughton are a strong midfield pairing that can burst through to take scores, while this year in particular there seemed to be more room for Róisín McCormick and Caitrín Dobbin up front. And of course, both players can use their pace to get past their marker and find the net.

Antrim’s year in the All-Ireland senior championship just seems to have boosted their confidence. They scored a goal each in the early stages of the provincial final. It was the perfect start for a team looking to make the breakthrough.

If the Shamrocks can replicate that start in Ashbourne, then the confidence will spread through the team as it did in Páirc Esler.

Drum and Inch beat Ogonnolloe from Clare in the Munster final four weeks ago and would have had a chance to attend the Newry game.

Obviously these are players that the defence have particular need to watch and, if Loughgiel can’t get the type of start they got against Slaughtneil, they have to keep pace with the Tipp girls until play opens a little over the last quarter.

Loughgiel are entering the All-Ireland arena in the best possible psychological state. They just need to back up their Ulster final performance on the pitch.

Who would bet against Sarsfield’s from Galway in the other semi-final against St Vincent's of Dublin in Birr (tomorrow, 2pm)?

They have appeared in five of the last six finals, winning two, while the county champions from Galway have missed out on a final appearance on just two occasions since Rossa beat Drum and Inch in the 2008 final.

A Sarsfield’s v Loughgiel final would be very interesting.