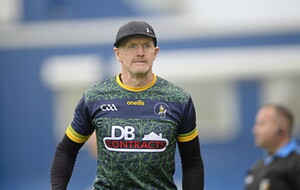 Gregory O'Kane looking forward to some down time with his family after yesterday's final win Picture: Mark Marlow

THROUGH the thick green haze of flares, the Dunloy players celebrated a magnificent four Antrim championships in-a-row at Corrigan Park yesterday afternoon, matching the feat of the Cuchullain’s of the early ‘Noughties’.

Unlike their last two final victories over Loughgiel Shamrocks (2020) and O’Donovan Rossa (2021), Dunloy were pushed all the way by Cushendall who mounted a brilliant challenge from start to finish.

But in the final seven or eight minutes, Dunloy’s class told with first half substitute Chrissy McMahon netting in stoppage-time for Gregory O’Kane’s men to push their advantage out to six points.

Cormac McClafferty and Sean McAfee grabbed a goal apiece for Cushendall at the start and end of an enthralling first half, but in the final analysis Dunloy’s superior finishing ability was the difference between the sides.

Keelan Molloy hit three points from play, all at crucial times for Dunloy.

Away from the celebratory hub at pitch-side, Molloy joked he was looking forward to the Tuesday club this year more than the Monday club.

Leaning against the fence at the edge of the pitch and looking exhausted, Paul ‘Shorty’ Shiels sighed: “That was brutal out there, really, really tough.”

On the sideline, Gregory O’Kane lived every second of this final and wasn’t in the least bit surprised by the extent to which his Dunloy side were tested by their rivals.

“We were pushed every road – physically, mentally, the game going away from us, backs-to-the-wall, there were bodies on the line, you were looking at it, players are dying on the ball and you’re thinking: Where are they getting it from? It was a pleasure to watch.”

Dunloy will have to wait seven weeks before they take on the winners of Slaughtneil and Portaferry in the Ulster final on December 4.

While his players will enjoy some down time over the next few days, O’Kane has his own perfect Monday planned.

“Well, family is everything,” he said.

“In life, everything goes back to family. Tomorrow you’ll probably see me on Portrush strand, me and the wife and the dogs, the kids will be at school.

“We’ll chill out and have a cup of coffee, look into the sea and think we’re in a fantastic place. Life is about the small things.”