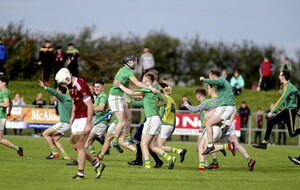 The Cuchullain's are aiming for four-in-a-row in Antrim and appear to be hitting form at just the right time, while Cushendall stumbled into their first final in three years against Loughgiel Shamrocks less than a fortnight ago.

However, no-one will dispute the best two teams in this year's championship have reached the final.

After a rusty opening 10 minutes against St John's in their semi-final, Dunloy blitzed the west Belfast men by ramming 5-22 past them.

“If you look at their full-forward line the last day, and you've Nigel [Elliott] and Ronan [Molloy] as well, they've the option of ‘Gabby' [Gabriel McTaggart] going in there to mix it up,” said Campbell.

“Maybe we need to do more work further up the pitch so it doesn't get to them because when the ball does go into them they are very hard to stop.

“They are all great forwards for Antrim never mind at club level.”

The 27-year-old Ruairi Og has won three championship winner's medals but they've dried up in recent years as they suffered back-to-back knock-out defeats to a resurgent O'Donovan Rossa in 2020 and '21.

“When you're young you think you'll be in finals every year, but that's not the way it works out,” said the Antrim captain.

“Even when we got to the All-Ireland final [2016] I remember thinking that we'll be back here again and years down the line we haven't been back.

“It goes in a flash and you see that with Dunloy - the crop that they have at the minute and making the most of it while that crop's there. They're going for four-in-a-row and they are above everyone else in the county. Everyone is chasing them to bring them down. So you do have to make hay while the sun shines and Dunloy are doing that.”

Cushendall skipped through the group stages of this year's championship before suffering some end of game turbulence against Loughgiel in their semi-final in Ballycastle, scraping over the line by a point.

“We hurled and did what we wanted to do in the game, and then there were periods where we were extremely poor,” Campbell acknowledged.

“I think our performances in the group stages against Loughgiel and St John's were a bit better. I suppose semi-finals are there for winning, and that was the case that day.

“But if we're going to get anywhere near Dunloy we need a massive improvement.”

Campbell admitted the manner of those pair of championship losses to Rossa - a quarter-final and a semi-final - were the driving force within the Cushendall ranks.

“Probably the worst thing was how we lost those games against Rossa - with the goals that went in, especially last year.

"That was probably more hurtful to us because we'd pride ourselves on being good defenders, a tough team and being able to close out games in years gone by, but not over the last two or three years.

“But this year we were going alright in the league, we've been able to develop a few players and we've been fairly consistent in the championship – nothing spectacular, but it was important to win that semi-final against Loughgiel because it might have been in the back of some players' heads: ‘We're here in another semi-final again – what if we let another late goal in?'

“So there's just that bit of relief. Finals are where you want to be but the hurt is definitely there for some players where they want to drive on and show that we are good enough to win big matches."