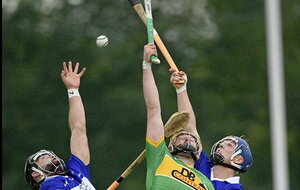 EVEN when St John’s challenge started to falter midway through the first half, the Dunsilly crowd could still appreciate class in their midst.

From one to 15 and those who were sprung from the bench, the Cuchullain’s looked imperious. No wonder boss Gregory O’Kane explained afterwards that his hardest job is picking his starting 15.

Nobody in the county has the kind of depth the Dunloy hurlers have.

For all of Cushendall’s renowned granite-like will and ability to grind opponents down, Dunloy’s free-scoring forwards will take some stopping when the pair collide in the October 16 showpiece decider.

Conal Cunning and Keelan Molloy were a joy to watch yesterday and completely unmarkable.

Cunning bagged two first-half majors – in the 10th and 25th minutes – with Nigel Elliott chipping in with a goal in between.

And once Keelan Molloy got off the mark in the 16th minute, he added two more brilliant points before the interval and produced a ruthless goal finish three minutes after the restart to reinforce the gap in class between themselves and St John’s.

In last season's epic semi-final, the Johnnies were reduced to 14 men in the opening minutes and despite their numerical disadvantage they just came up short.

Michael Dudley was correctly red-carded for felling Paul ‘Shorty’ Shiels in an off-the-ball incident in the 29th minute, but there would be no gutsy comeback from the Johnnies this time.

If anything, Brian McFall's side already looked a beaten side before Dudley’s moment of indiscipline as they trailed 3-8 to 0-4 and 3-11 to 0-5 at the interval.

Dunloy were still hungry for goals with Seaan Elliott and Ronan Molloy spurning chances before the latter rifled home his side’s fifth of the day with four minutes of normal time remaining and stretched their advantage at the end to a massive 22 points.

St John’s boss McFall was livid after watching his side “give up the fight”.

“As soon as Dunloy got the first goal, our heads dropped and we never recovered from it,” McFall said.

“It’s a mentality thing with us, we down tools and it happened there today. To be quite honest, it was an embarrassment. I’ve had many low days with the county but I’ve never had a low day like that from being involved with St John’s in my life. It’s hard to take.

“I’m more disappointed for our club people who came up and paid money in to watch that. It’s not good enough.”

And yet, the west Belfast men made a better start than the defending champions. Oisin MacManus sent over a couple early frees and Shea Shannon found his range, but as the half wore on they racked up nine confidence-sapping wides.

The Johnnies were slightly loose in their marking all over the field. And when you’re loose on the likes of Cunning, Nigel Elliott and Keelan Molloy, they are the most ruthless of finishers.

In the 10th minute, Cunning ran through unopposed to bag his first three-pointer and Nigel Elliott did the same 12 minutes later.

Dunloy’s midfield and half-back were winning everything and when one St John’s puck-out didn’t reach its target, Ronan Molloy set up Cunning for his second five minutes before half-time.

“If you give Dunloy chances, they’ll punish you because they have class players,” McFall added. “We didn’t take our opportunities.”

Yesterday, Dunloy looked as good as they’ve ever been under Gregory O’Kane’s watch.

“You just need to go and win semi-finals,” said O’Kane.

“The first 10 minutes we looked rusty, but we’re four weeks out since our qualifying game against ’Rossa, so it took us a while to get up to the speed of the game. What we’re trying to do is improve every day.

“In fairness to St John’s, they had a man sent off and that allowed us to have an extra man. But, look, we’ve a super panel here and the hardest thing is picking 15. You want everybody to play and a lot got game-time today which was important.”

Peter McCallin, Ciaran Johnston, Shea Shannon and Ruairi Galbraith kept their shoulder to the St John’s wheel even though another semi-final defeat loomed from a distance out.

Padraig Nugent hammered home a 21-metre free for St John’s in the 36th minute but their supporters still winced at the scoreboard [4-12 to 1-5].

If the Johnnies weren’t demoralised enough, all of Dunloy’s subs made a strong impression too, although Deaghlan Smyth’s ankle injury could be a worry for them ahead of their final meeting with Cushendall in 13 days’ time.

The two best hurling teams in the county have emerged in this year's decider - but Dunloy's grip on the Volunteer Cup has never felt tighter.