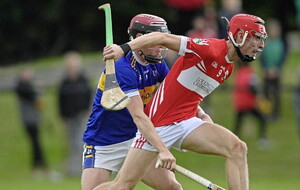 James McNaughton was in brilliant form against 'Rossa in the quarter-finals Picture: Mark Marlow

Dunloy will still take some toppling to disturb the natural order. After two disappointing championship campaigns, Cushendall have rediscovered their mojo.

Loughgiel Shamrocks made significant gains the last day out against O’Donovan Rossa to nudge the Johnnies to fourth ahead of this weekend’s eagerly anticipated semi-final ties.

It’s really up to the Shamrocks and St John’s to challenge the pecking order and be the incendiary device that ’Rossa were in 2020 and ’21.

In both years, Cushendall fell to the west Belfast men. In 2020, the year of COVID, the Ruairi Ogs weren’t in great shape.

The totemic Neil McManus limped through that season, Cushendall simply couldn’t absorb the hit and were duly dumped out at the quarter-final stages up on the Hightown Road.

They were markedly in better shape last season, but it was simply Rossa’s time.

Michael Armstrong produced a stunning second half display, bagging two goals and Dara Rocks raised a decisive green flag up with the last puck of the game up in Dunsilly.

“We definitely spoke about last year’s semi-final defeat and what happened that day,” said Ruairi Og boss Brian Delargy, “and making sure it doesn’t happen in any other match.

“That ’Rossa game took on a life of its own, it was helter-skelter, no real structure to it. But some of these boys have six championship medals in their pockets, so I don’t think a semi-final defeat one year will affect them. I know they’re hungry for it this year.”

Cushendall reach this year’s semi-finals with three straight group wins under their belts against St Enda’s, Loughgiel and St John’s.

“We had Dunloy in the group stages last year and we wanted to make a really good start, whereas this year we wanted to build our way into it. So we’ve tried to time it better this year. We’ve ticked a lot of boxes to be honest,” added Delargy, holder of three county championship medals and now in his second year as senior manager of his club.

Cushendall handled Loughgiel’s threat well in their middle group game in mid-August and have had four weeks to prepare for tomorrow’s sequel, bolstered no less by the surprise return of warrior defender Arron Graffin after a knee injury threatened to ruin his championship before it had even started.

But the Shamrocks will feel they can get closer than the five points that separated them earlier in the campaign after a morale-boosting quarter-final win over a weakened ’Rossa team 13 days ago, where they shot the lights out against 'Rossa, racking up 3-27 with seven different scorers.

There was a lovely attacking fluidity about the Shamrocks too, but how tough a test ’Rossa actually presented is a moot point.

“Most of our players were up at the Loughgiel-Rossa game,” Delargy said. “There wasn’t much pace about the game but Loughgiel still hit 3-27 which was some shooting. I was impressed with them to be honest.

“I was impressed with Dan and Eddie [McCloskey], James [McNaughton] and I thought Shea Casey won a few balls in the forward line when the going was tough too. Their middle third was very strong.

“But I’d be hoping we’d bring a bit of physicality to it on Sunday.”

Shamrocks boss Hugh McCann will fancy this semi-final in Dunsilly tomorrow and their attack will take some stopping.

But Cushendall have the defensive personnel in Paddy Burke, Eoghan Campbell and Graffin to hold them.

It’s whether or not they have enough scoring power themselves to edge into their first final since 2019.

But with McManus and Christy McNaughton in flying form and ably supported by Niall McCormick and Sean McAfee, the feeling is the Ruairi Ogs may just have enough to quell the Loughgiel rebellion.

'We have to drive on with it, because that's what Damian would have wanted us to do'