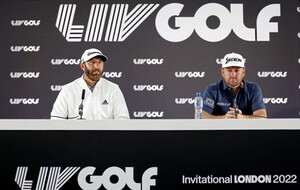 Dustin Johnson, (left) and Graeme McDowell during a press conference at the Centurion Club, Hertfordshire ahead of the LIV Golf Invitational Series last June

AS someone who has only a casual interest in golf, I’ve found Rory McIlroy’s press conferences compulsive viewing lately.

Whether you agree with him or not, like him or not, McIlroy’s public musings have always been interesting, sometimes compelling even.

When LIV Golf gate-crashed the sport with an almighty bang, the 33-year-old’s commentary carried an altogether sharper edge to it.

Whether by design or not, McIlroy has been cast as the perceived socialist railing against the ugly appendages of rampant capitalism – even though all the top players are ultimately prize golfers and, to varying degrees, driven by money.

If there is a moral compass around someone’s neck, it’s Rory’s - even if he was seduced one time into playing a round of golf with Donald Trump.

When he was debating whether to play for Britain or Ireland at the 2016 Olympic Games in Rio, and ended up withdrawing because of the threat of the Zika virus, he divided opinion.

It didn’t matter that he felt British and Irish; for some, that was unpalatable. He had to be one or the other, not both.

I never harboured a strong opinion on him one way or the other, but I’ve grown to like him, largely because he doesn’t filter his opinions. If he indeed is filtering them, he would need to try a new filter.

His PR people must fret every time a microphone is thrust in his direction, or when he sits behind a press conference table facing into a few dozen journalists who don’t really have to drill down too deeply to find out what he’s thinking.

For better or worse, McIlroy is an open book. He's led the campaign against the so-called 'Saudi-supporting' LIV defectors on the basis that it's doing irreparable harm to the established structures and intricate traditions of the PGA tours - and with this ceaseless animosity between the emerging golfing factions, it could have serious repercussions for the Ryder Cup - the most prestigious team golf event in the sport.

Speaking ahead of this week's BMW PGA Championship at Wentworth, McIlroy announced that he "hadn't got much of a relationship" with four of his Ryder Cup team-mates from last year - namely LIV golfers Ian Poulter, Lee Westwood, Sergio Garcia and Bernd Weisberger - who are among the field.

"My opinion is they shouldn't be here, but again that's just my opinion," McIlroy said.

Critically, too, the dismay that seeps from McIlroy's press conferences - and indeed other anti-LIV golfers - is real, whereas in professional boxing it's often hyped up to get bums on seats or to grow the pay-per-view numbers.

In an era where seemingly every other sportsperson is media-trained and so adept at speaking for half an hour and saying absolutely nothing, it's refreshing to listen to someone like McIlroy who speaks his mind, as if to tell other sports personalities that it's okay to have an opinion and to voice it.

It also gives sporting discourse a layer of authenticity rather burying meaningful conversation under the rubble of tired, old soundbites that do nothing for the promotion of the sport itself and as a result viewers and readers switch off as soon as the game is over.

Indeed, McIlroy's utterances against the LIV golfers having their cake and eating it this week has provided the platform for others to voice their feelings too.

Shane Lowry also expressed his concerns with some of the Wentworth field.

“I can't say I'm comfortable with everyone being here. There's some of the guys I kind of don't mind them being here given what they've done for the tour over the years and there's certain guys that I just can't stand them being here, to be honest and I don't like it that they're here.

McIlroy, a four-time Major champions, has made mistakes and for one so at ease with articulating his opinions, he’ll make more in the future.

But he'll probably not make as big a mistake in his career as Graeme McDowell's when he explained in rather clunky terms why he decided to join LIV - to help grow the game in places like Saudi Arabia, a nation whose human rights record is abominable.

Of course, the Saudis are not the only nation with terrible blemishes.

Nevertheless, McDowell could hardly have believed his own trite, do-gooder remarks about his altruistic desire to see the game of golf take off in different corners of the globe through LIV.

Everyone knew McDowell didn't give two hoots about the health of the game in Saudi Arabia.

It was all about the money. And if he had been up front at the outset about his singular pursuit of more noughts on his bank sheet, he mightn't have incurred the wrath that he did.

In a BBCNI interview, he subsequently clarified why he was joining the LIV Golf invitational tour.

“What I do is I play professional golf, I play golf for money,” McDowell said in June.

“I’ve chased that money all over the world all my career. I’m 43 next month and, you know, the LIV Golf opportunity was incredibly lucrative.

“Do I research into the morals of every dollar I’ve ever made? No, I don’t.”

Everyone will have their own view on who occupies the moral high ground in this debate that sees elite golf tear strips off itself, but I like Rory McIlroy regardless. I like him because he speaks his mind.

If only more sports did the same - we could end the constant stream of drivel that passes as meaningful discourse.