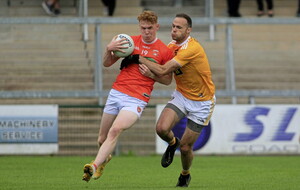 THE National League season might be upon us, but new Antrim football boss Andy McEntee is still rebuilding the spine of the team as they host Offaly in their Division Three opener.

The size of the rebuilding job in Antrim is probably bigger than anyone anticipated, with McEntee searching for a new number three, a new number six, a new centre-forward and full-forward while also carrying some surgery out in midfield.

The Johnston brothers – Ricky and Martin – have stepped away from the panel. Mick and Tomas McCann – both carrying injuries - haven’t re-joined for the new season.

Their Cargin club-mate James Laverty, who occupied the centre-back role last season, has retired from the inter-county scene and experienced front man Conor Murray of Lamh Dhearg isn’t expected to feature in 2023.

Antrim lost back-to-back McKenna Cup games to Armagh and Cavan and since then they’ve managed to shoehorn in a few challenge games, the most recent was against Wicklow in Dundalk last Sunday where reports suggest things are taking shape despite injuries to a couple of key players.

A no-nonsense figure who spent six years with his native Meath, McEntee makes no secret of the fact he would have liked more games under his and Antrim’s belt ahead of the Offaly game, who themselves pulled out of the O’Byrne Cup due to the tight timeframe.

“It’s often said it takes you one or two years to find out exactly what you’ve got,” said McEntee.

“I have a fair idea. Definitely, your ideas change over the course of challenge games and McKenna Cup games. But we haven’t had enough games.

“This idea of not being able to play challenge games before the start of January is ludicrous, really. Then you’re trying to crush three or four games into the space of 10 or 12 days and it’s no wonder teams pick up injuries and it’s no wonder managers have said: ‘This is not worth it.’

“I know it hasn’t happened with the McKenna Cup as it has always been treated a little bit more seriously than our counterparts in other provinces.

“But I think every manager and every team would probably appreciate the opportunity to play more games in the month of December when the squeeze isn’t on.

“You’re throwing in Sigerson Cup matches on top of it as well. But, look, it is what it is, you’re picking up injuries in these games. We picked up a couple against Cavan unfortunately and you’re trying to shuffle things round a little more but it’s the same for everybody.”

Cathal Hynds of Con Magee’s and Joe Finnegan of St Brigid’s have generally occupied the full-back and centre-back positions in pre-season.

Conor Stewart is fit again after missing the majority of last season’s campaign under former boss Enda McGinley, and ’Rossa playmaker Dominic McEnhill has received plenty of game-time and could be in line to start at Corrigan Park on Sunday.

Aghagallon’s Oisin Lenehan, who showed up well in pre-season, is struggling with injury ahead of Sunday as is Creggan’s Kevin Small.

However, Marc Jordan, Dermot McAleese and Patrick McBride are among the more experienced core of players and are fit to play.