Down without injured quartet for Allianz Football League opener against Tipperary 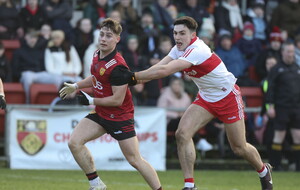 DOWN will be without a quartet of players for Saturday’s National League Division Three opener against Tipperary at FBD Semple Stadium.

Kilcoo half-forward Ceilum Doherty and his All-Ireland club-winning team-mate, goalkeeper Niall Kane, will miss the first round clash with the Premier County and also out of the reckoning are Mayobridge clubman Shane Annett and Clonduff’s Ross Carr.

All four are also expected to miss the second round game against Antrim in Newry as well.

Kane hasn’t featured for his county so far this season meaning Glenn’s John O’Hare looks certain to continue in goal for Conor Laverty’s side. O’Hare kept a clean sheet in the McKenna Cup opener against Monaghan and had solid performances between the sticks against Donegal and then, in the semi-final, Derry.

Versatile midfielder Annett and forward Carr were both included in Laverty’s starting line-up for the season opener against Monaghan while Doherty, a hard-working presence in the half-forward line for club and county, was a goal-scorer against Derry.

Despite the loss of the quartet, the Mourne county squad is in relatively good shape for their trip to Thurles however their line-up for the League opener could depend on how Down’s players come through this week’s Sigerson Cup games.

Ulster University take on UCD at Jordanstown today and Laverty, like all county managers, will have his fingers crossed that Ryan and Danny Magill, Odhran Murdock and Andrew Gilmore come through that round three fixture unscathed.

Also today, Queen’s University are up against University College Cork at Abbotstown and the QUB Down contingent will include Mourne county hopefuls Peter Fegan and Paddy McCarthy.

Down began 2023 with two wins out of two in their Dr McKenna Cup section and progressed to a semi-final against eventual champions Derry.

Despite two goals from Niall Donnelly and another from Kilcoo’s Doherty, the Oak Leafers won a penalty shoot-out to progress to last Saturday’s final in which they beat Tyrone to take the pre-season title with a convincing 3-11 to 1-5 victory at the Athletic Grounds.

Meanwhile, in Munster’s equivalent, the McGrath Cup, Tipperary had little trouble seeing off Waterford in their opener and looked set for a place in the final with time almost up against Limerick in their second game.

Conor Sweeney top-scored with 1-4 for Tipp but a Colm Sweeney point six minutes into injury-time earned the Treaty County a 2-10 to 1-13 draw and meant that Tipperary missed out on a place in the final on scoring difference.

Sweeney was also the leading score-taker when Down last played Tipperary in the National League back in 2020. The Ballyporeen forward scored half of his side’s total when Tipp held Paddy Tally’s side to a 0-10 apiece draw in a Division Three encounter at Clonmel.

Owen McCabe, Pat Havern and Barry O'Hagan, all scorers for Down that day, are expected to feature on Saturday and that draw three years' ago proved to be crucial as the Ulster county clinched promotion to Division Two alongside Cork. The Mournemen finished with nine points, as did Derry, but they progressed to the second tier on scoring difference.

Tipperary were promoted from Division Four last year but have been slow starters in the League in recent seasons. Their last opening round win came back in 2018 when 3-7 from potent forward pair Liam McGrath and Michael Quinlivan spearheaded victory against Cork. 2016 Allstar Quinlivan wasn’t part of the McGrath Cup panel due to work commitments.