Connlan Bradley was Glen's leading light in attack a decade ago, but had lost his place in the team by the time they reached a first senior final in 2019. It took some convincing to get him to try out in nets but now he has two championship medals and is aiming to bury last year's demons in Sunday's Ulster final. He spoke to Cahair O'Kane… 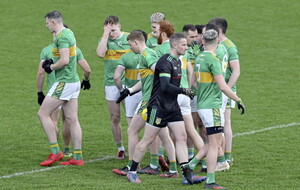 “I’m pretty calm with boys giving me s***, I can cope with that and dish it out too, whatever’s needed to keep boys right." Picture by Margaret McLaughlin

DO nets? He didn't even like standing in for his turn at five-a-side. Hated it, almost.

When his brother Emmett first planted the seed, Connlan Bradley refused to water it.

A suspicious mind would deduct there might have been a conversation between Emmett and then-manager Jude Donnelly, for they were at him very soon after.

“Jesus, no, not a chance!” was his response.

Three years later, he's glad that he gave in.

When Bradley followed eldest sibling Odhran on to the Glen senior team, they were a struggling senior outfit that ended up playing a bit of intermediate football too.

In 2013 they lost an intermediate championship final to Foreglen. Bradley wasn't involved. He'd spent the summer in San Francisco and couldn't get back in when he came home. Did the same the following year only in Philadelphia.

Being at Jordanstown wasn't helping. Coming off county minor and U21 teams, Bradley would have carried a lot of Glen's scoring threat back in those days. But his appetite weakened with each passing year.

Only the fact that during his time in Belfast, Mickey Culbert and city-based Enda Gormley were successive Glen managers and took him up and down the M2 for training, he probably wouldn't have made it this far.

“I probably would have found it tough to drive home or get a bus if they hadn't been there. I swear to God.

“I was going home, not wanting to train, getting training done and then straight back up to Belfast.

“I probably wasn't looking after myself overly well back then. I was in decent shape when I was playing minors and 21s, but I went up to Belfast and probably let myself go a wee bit.

“I think it's because I wasn't into the football as much as I would have been if we had been a better team.

“That probably wasn't a good mindset to have but it's just how it made me feel at the time.”

Yet here he is now, the oldest on the team at 31 and a relative success story of hybrid goalkeeping.

Two county medals is two more than he thought he'd depart the stage with.

The next breed were always coming but he wasn't convinced he'd be around long enough to help them.

“I was always like ‘I'm never, ever gonna win a John McLaughlin'. I never thought I would.”

He had lost his place in attack. It was 61st minute desperation that saw him launched into their first final in 2019.

Bradley was always a big kicker and Glen were seeking a score that would have taken Magherafelt to a replay. It never arrived.

The goalkeeping position had never looked like it would be a problem for Glen.

Andy Warnock was Derry minor goalkeeper when they reached the 2007 All-Ireland final. Ciaran McCloy was number one at the same grade in 2013 and won a Hogan Cup with St Pat's Maghera. Callum Mullan-Young was Derry minors' Ulster winning goalkeeper in 2015.

They were all instinctively natural goalkeepers, shot-stoppers from a different era.

Yet when Magherafelt hammered the Glen kickout in the first half of that 2019 final to build a winning platform, Mullan-Young's confidence was shot to pieces. They had to do something else.

Connlan Bradley never expected to be that something else.

“My first game was a friendly down in Portglenone. I did well, but conceded one goal and I was like ‘what the hell just happened there?' It's a scary position.

“I remember thinking ‘this doesn't feel good at all' when a goal goes by you, and your defenders are turning around and giving you stick. I grew into it pretty quick.

“I'm pretty calm with boys giving me s***, I can cope with that and dish it out too, whatever's needed to keep boys right.

“It was just lucky enough we had a decent defence where I didn't have many goals going in by me at the start.”

TWO weeks ago he informed Rory Gallagher that he was leaving the Derry setup.

To ever have been there as understudy to Odhran Lynch is remarkable in many ways.

When the call came after the Covid championship of 2020, he heard the voice on the other end.

“I was like ‘what the hell's he ringing me for?'” laughs Bradley.

The kicking was mostly natural and Thomas Mallon's coaching brought him on in the traditional aspects of goalkeeping.

But in two-and-a-half years he played just 70 minutes of football, a single McKenna Cup game against Donegal that he practically begged to play in.

Looking through the glass most would have assumed that he was happy enough to be there in a year that saw Derry win a first Ulster title in 24 years. Part of him was. Most of him wasn't.

“100 per cent I wanted to play. Obviously it was a very exciting time for the county but even when we won, I don't feel like I was ecstatic that we did win. I wasn't going buck mad after games.

“I was obviously happy I was part of the panel but I would have enjoyed it a lot more if I had been playing a bit. I found it hard to really be happy about it, to be honest,” he admits.

People that are happy sitting on benches tend never to find themselves near a county panel. If that sounds selfish, it is, but there's nobody any different.

Bradley says he regularly thought about quitting during the year, simply because he wasn't getting any football anywhere. He played one game until Derry's season ended and he went back to Glen. Now 31, the oldest player on the team, he just couldn't bear the idea of doing the same again next year.

Malachy O'Rourke has drafted in Steve Williams, former Dundalk goalkeeper who worked with him for a while in Monaghan, to coach the goalkeepers.

As he speaks, he's packing the bag to head out to training. The rest of the team are out the following evening so it's just the goalkeepers. That removal from the central hub of the team has been a difficult adjustment.

Days he finds himself getting bored in goals. He's spoken to management about it recently, about how he finds it hard to stay concentrated and how that in turns affects him when he is called into action.

Glen's policy this year of going long more often from their restarts has made that trickier. When he's had to kick long, the legs can feel cold from their inactivity.

“It's always trying to find different ways to keep myself active, keep my brain going. I just keep moving, keep saying to myself that I'm ok.

“Sometimes you can just go to sleep in a game, so I'm trying all the time to keep focused on what's going on.”

In three years he's had very few really tough days. Having Emmett and Conor Glass to kick at helps but Glen built the first two years around going short. Bradley mastered that fairly quickly and gave them something reliable to build from.

But nothing is ever perfect.

There were eight minutes gone in extra-time of last year's semi-final when Conor Glass kicked Glen into the lead. The whole air of the Athletic Grounds was that this was the game's seminal moment.

The Derry champions had hung on and hung on, got extra-time out of it and now, for the first time in the whole game, they led.

Had they even got to half-time in front, they might have won it.

No team smells a chance like Kilcoo smell a chance.

Paul Devlin snaffled it up and fed Jerome Johnston, who rifled into the roof of the net. Connlan Bradley's hands went straight to his head. Kilcoo led and were never caught again. Kilcoo would win an All-Ireland while Glen stewed for winter.

“I think I leant back a bit, it went a wee bit harder than it should have and, aye, the goal went in and my heart just sunk: ‘S***, what have I done?'

“We did have time to try and fix it but they're a very, very hard team to break down and if they get that wee sniff of a goal or a chance to score against you, they'll take it.

“They're very clinical and obviously we found that out, which wasn't great. I do feel to a certain extent it wasn't my fault, even though we didn't perform overly well on the day compared to against the likes of Scotstown.”

It's the only notable foot Connlan Bradley has put wrong since he took the number one jersey. His range of kicking has become a major asset and his confidence in the role has grown.

When Jude Donnelly and Stephen Murtagh came to convince him, they sold it to him bluntly: This is the only way you'll be guaranteed you're in the team.

Do nets? Sure why not.