Aghagallon's smash and grab as Portglenone hearts are broken 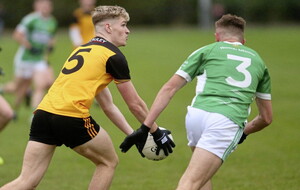 IN the sheeting rain, Eunan Walsh was crying into the arms of his family. Elated. Relieved. Sad, too, that his late grandfather and Aghagallon stalwart Seamus Walsh wasn’t there to witness such emotional scenes under the floodlights of Dunsilly.

Goal hero Adam Loughran was being lifted into the air during a post-match interview by his adrenaline-pumped goalkeeper Damian O’Hagan.

A matter of yards away Portglenone manager John McKeever was crouched down in the wet turf.

His dream of leading his beloved Casements to their first senior final since 2009 had been shattered into a million pieces.

Moments earlier he’d approached referee Sean Laverty to ask where the extra couple of minutes were found at the end of stoppage-time in extra-time that saw Aghagallon miraculously win this semi-final through a thumping goal by Loughran.

More than anything, McKeever’s was a tearful plea to the match official.

But the bald truth of this compelling narrative was that Portglenone failed to see the game out in both normal time and extra-time.

They suffered a similar fate against Aghagallon in last year’s semi-final where they were five up in extra-time and blew it. Under dark September skies yesterday evening they blew it again.

And yet, Portglenone were the better of the two teams here. They led 0-8 to 0-4 at the half-time interval.

And still they lost.

Gareth Magee converted his fourth free of the day in stoppage-time of extra-time to reduce Portglenone’s lead to two points.

And after 84 minutes, it was the corner-forward’s ‘Hail Mary’ – a wayward kick towards the square, if truth be told – found the hands of bustling full-forward Ruairi McCann who managed to recycle the ball through Ciaran Magennis's hands and on to Loughran, and the young forward hammered the ball home to win this epic semi-final.

For the victors, McCann played a huge role. He raised two green flags – the first coming in the 58th minute, gaining the slightest of touches to redirect Eunan Walsh’s high ball into the Portglenone net.

And when the Casements struck the first two points in extra-time to forge ahead, McCann celebrated his second major after brilliant approach play from Walsh and Loughran.

But spare a thought for Dermot McAleese, Paddy Kelly, man-of-the-match Oisin Doherty and Ryan Convery who couldn’t have given another bead of sweat for the Portglenone cause.

This quartet were magnificent for over 80 minutes of football. John McKeever’s game-plan couldn’t have been working any better in the opening half. They’d manage to tie up Loughran and pushed Eunan Walsh to the fringes of the game – but the pair broke the shackles as this semi-final wore on.

Walsh hit two raking second-half points when he was moved from midfield to full-forward after the break – but still Portglenone always seemed in control of the scoreboard - until Ruairi McCann flicked the ball to the net in the 57th minute and a Loughran point and a Magee conversion forced the tie into extra-time.

When you concede three soft goals, you probably deserve what’s coming to you.

For all of Portglenone’s smart, calculated play in moving the ball up field and picking off their scores, their defence was gripped by fear every time Aghagallon launched it high into the square.

Audi Kelly's men probably should have done it more often too. As the rain came sweeping down at the final whistle, the depth of Portglenone's heartbreak was impossible to imagine.

As for Aghagallon, they find themselves in their second consecutive senior final.

Their resilience was quite simply awesome last night.