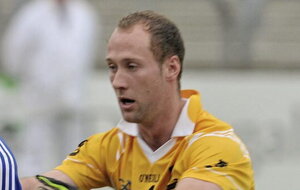 Martin Corey has been involved with Mickey Graham's Cavan in recent years, but now looks poised to form part of his brother's Monaghan management team. Picture by Philip Fitzpatrick

VINNY Corey is set to be confirmed as Monaghan’s new manager tonight, ending a three month search for a successor to Seamus McEnaney.

Corey’s backroom team is expected to include brother Martin, who was involved with Mickey Graham’s Cavan until last summer. Others to have been mentioned as possible additions to that management team are Corey’s former Farney team-mates Dermot McArdle and Owen Lennon.

It would be a familiar voice for the Monaghan players as Corey had been part of McEnaney's backroom team in recent seasons, having only finished up his inter-county playing days in 2019.

Indeed the Clontibret man’s name is one of many to have been linked with the role in recent weeks and months, a list that includes ex-Dublin players Jason Sherlock and Ger Brennan, Niall Moyna and former Monaghan U20 boss Mark Counihan

The most recent name in the frame alongside Corey was Micheal McDermott. The Cavan native previously managed Clare and has won county titles in the Banner county, where he took Kilmurry-Ibrickane to an All-Ireland club final, as well as Cavan, Limerick and Meath.

He had previously been nominated for the Monaghan position in 2012 but was overlooked in favour of Malachy O'Rourke, who went on to win two Ulster titles.