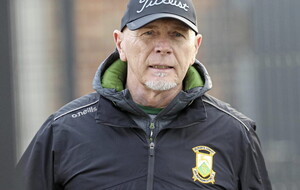 Jim McCorry's Burren side needed extra-time to get over Mayobridge in last week's championship opener. Picture by Philip Walsh

BURREN will welcome Donal O’Hare back into the fold for Sunday’s championship clash with RGU Downpatrick – and boss Jim McCorry insists the former Down star still has a huge amount to offer the St Mary’s side.

O’Hare, who was last night confirmed as part of Benny Coulter’s Down minor management team, has had to manage different injuries through the years, while the 31-year-old has also been involved with Declan McCoy’s coaching set-up at Louth outfit St Bride’s this year.

They defeated Mattock Rangers on Sunday to secure a county quarter-final spot, but he is expected to swap the sideline for the field of play at St Patrick’s Park in Newcastle as Burren bid to book their own last eight spot this weekend.

One of the top forwards in the county for the past decade, O’Hare – who was suspended for last week’s victory over Mayobridge - remains a major threat and his return, along with fellow stalwarts Gerard McGovern and Connor Toner, is a timely boost.

“Donal’s back in the fray now,” said McCorry, who will be without towering forward Shay McArdle.

“He had been carrying a wee bit of an injury as well so that suspension didn’t really do any harm. We had Gerard McGovern missing for that game as well, he was out for about a month, Connor Toner broke his arm against Rostrevor in the league a good while ago.

“Donal came and asked at the start of the year [about working with St Bride’s], it was session a week on a different night, it didn’t affect us and if it did then Burren would come first. That’s the way Donal has been.

“Donal would be a fantastic coach. He works with the underage in the club, he’s a fantastic leader, was captain for a few years, and when he speaks players listen.

“Donal’s the type of player - he was asked back into the county at the start of the year, between the U20s and seniors we had something like 12 involved, an awful lot missing for a good part of the year - and he didn’t go back in, obviously with injuries and stuff like that. But he would have been a great addition, no doubt about that.

“The ability is still there, Donal’s always kept himself very fit, he has a great footballing brain, same with Gerard McGovern and Conaill McGovern.”

The St Mary’s have been in flying form of late, culminating in their league final victory over county kingpins Kilcoo, and are widely considered the Magpies’ main rivals for the Frank O’Hare Cup once more.

However, they were pushed all the way by Mayobridge in Newry, eventually prevailing after extra-time to avoid dropping into the last chance saloon loser’s group.

McCorry wasn’t surprised by the challenge presented by Steven Poacher’s men, but admits it showed they have to be at their best every time they cross the white line.

“Nobody within our group thought Mayobridge was going to be an easy game,” said the former Armagh assistant boss.

“We knew Mayobridge were going to be very tough, Steven had them very well prepared, they were solid defensively, very good on the counter-attack, kicked some miracle scores.

“It was a game we could have lost. After our video analysis the players themselves said we didn’t really implement what we had been doing in the league and what we’d been doing in training.

“There’s no doubt it was a wake-up call, even though we knew it was going to be close. It just shows you can’t take the foot off the pedal at any stage.”

Kicking Out: Refs will have problems until we fix the tackle