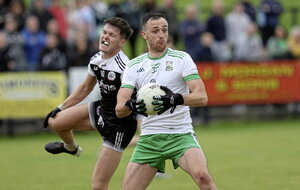 Things got heated between Burren and Kilcoo in Wednesday night's Down Division One final in Mayobridge. Picture by Louis McNally

THEY came from far and wide on Wednesday night, a larger than usual crowd for a Down Division One final gathered around the sides of the field in Mayobridge for the meeting of those most familiar of foes, Kilcoo and Burren.

A fair few with no affiliation to either turned up in expectation, maybe even hope, of seeing a row. This is how it work sometimes – word gets about, anticipation builds and, next thing you know, like Noah’s Ark, they’re piling through the gate, two by two.

After all, this pair have dominated the county championship for the past 13 years (Kilcoo 10, Burren three), with no other name on the Frank O’Hare Cup since Mayobridge in 2008.

Heading into the latest campaign, which gets under way next week, they are expected to lead the chase again. That Jim McCorry, once a hero in Kilcoo, is the Burren boss bidding to bring the Magpies’ reign to an end adds another level of intrigue – not that the Lurgan man allows himself to get too caught up with that side of things.

“The time we won the three in-a-row they said they were going to put a statue up to me in the church grounds,” he said with a smile last year, “I don’t think the foundations went in, and I don’t think I’ll be getting the statue…”

Yet while it may not be a traditional rivalry within Down, there is a historical context that also plays into the here and now.

For those old enough to remember, Burren were the high kings of Down football after conquering all frontiers during a glorious decade in the 1980s.

As well as cleaning up in their own county, the St Mary’s landed five Ulster titles between 1983 and 1988, with All-Ireland club crowns coming up the road in 1986 and ’88. The Magpies have since surpassed Burren’s championship tally in Down, won Ulster the last two times it was played, and are reigning All-Ireland champions having toppled Kilmacud Croke’s back in February.

The wind is very much at Kilcoo’s backs and - knowing nothing lasts forever, no matter how accustomed to success you become – they are determined to make hay while the sun shines. It might never be uttered in public, but those Burren milestones of yesteryear must surely stoke the fire looking down the road.

Wednesday night’s most recent instalment saw both sides finish with 12 players as an ugly second half skirmish got temporarily out of control. That came just over six weeks after an earlier league clash, one of four inside a relatively short space of time – who says familiarity breeds contempt? - saw five players shown red cards.

It sets the tone with championship lurking around the corner but, in terms of separate sub-plots, it is a curious situation for new Down boss Conor Laverty to find himself in – albeit not one that it is entirely new.

Last year’s county final against Burren saw him picked up by young defender Ryan Magill who, just four months earlier, was a central figure in the Down U20 side – managed by Laverty and Marty Clarke – that created such a buzz on the way to claiming Ulster honours.

Indeed, Down finds itself in the possibly unprecedented territory of having two serving county managers engaged in senior club championship action, with hurling boss Ronan Sheehan in goals for Newry Shamrocks. On Sunday he finds himself in the firing line against a Portaferry side containing the Sands brothers – Daithi and Eoghan – who spearhead his Down attack.

Given how recently Laverty was appointed, though, and the burden of expectation that now rests upon his shoulders, interest has cranked up another notch.

As well as being watched by a decent crowd in Mayobridge, Wednesday’s game was streamed by DownTV. Within minutes of the long whistle, video clips of the row were dropping into WhatsApp inboxes across the county and beyond.

Laverty may not have been involved in any of Wednesday night’s major flashpoints, but he will be aware that everything he does on the field, like everything he says off it, is subject to greater scrutiny than ever before.

When he comes to draw together a county panel later this year, a fair few Burren names are expected to feature. There will be plenty of others against whom he has indulged in championship combat too. Some choice words may have been shared along the way, who knows, but all of that will have to be parked once they come together for the one cause.

Even on the line, there is a chance Kilcoo could come up against a Mayobridge side coached by Marty Clarke – part of Laverty’s Down management team – in the weeks and months ahead. It is potentially tricky terrain to navigate.

Pete McGrath understands the position Laverty is in better than most.

When he was appointed Down manager in September 1989, McGrath was still playing for Rostrevor, a Division Two side then pushing to get back up among the big boys. Like Laverty, he was 36 at the time.

Having been a teacher at St Colman’s College since 1978, and Down minor manager from 1982, he was used to coming up against former pupils and men he had coached before. Yet forward McGrath was still going toe-to-toe with the likes of Paddy O’Rourke - Down’s All-Ireland winning captain in 1991 - on the club scene, then having the final word when it came to county.

It is an unusual dynamic, he admits, but not one that cannot be overcome.

“There are, of course, undercurrents in terms of the players he is playing against, as well as those he is playing with. And of course his playing profile is a lot higher than mine would have been.

“But I’m sure he isn’t sitting down at night thinking about all these things. From his perspective, he’s playing for his club at the minute, let’s not complicate it.

“At the end of it all people will judge him as Down manager by what unfolds over the next number of years; that’s the sole criteria people are interested in. Whatever happens between now and then as a Kilcoo player, I think that will be incidental to the whole thing.

“Just get on with it - that will be his approach, I’m sure.”