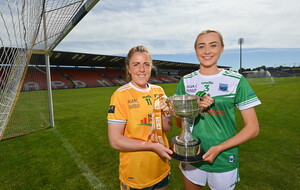 THE destination of the West County Cup, the All-Ireland Junior Championship trophy, will be finally be known when Antrim and Fermanagh come face-to-face in this evening’s junior final replay in Armagh.

Will it go north to Ulster champions or will it make its way west to the waters of the Erne?

Only the brave will call it.

The consensus from both captains Antrim’s Cathy Carey and Fermanagh’s Molly McGloin is that considering how the drawn game played out - a highly entertaining 1-13 to 1-13 draw on Ladies Finals Day in Croke Park almost a fortnight ago - that both teams were glad, relieved even, to come away with a draw knowing that it is very much all to play for today.

There will be no second chances, however, the game must be won today, and over the last 10 days both camps will have been trying to gain those vital few inches that it could all come down to.

The time since the final has been used to address what could have been done better and also to focus on what went well and to try and replicate that.

Antrim missed a lot of chances, their wides tally more than their pointed converted rate, and that will have been a big focus for manager Emma Kelly.

Their preparations for this replay were without manager James Daly but he returned from honeymoon ahead of schedule to be on the line today.

Despite his absence, the training and preparation continued at full tilt.

Both managers have named the same starting 15 as the last day and there should not be any changes to that. Northern Ireland netball start Michelle Magee, who returned home from the Commonwealth Games this week, is named in the match programme, although she also was for the final and it would not be a surprise to see her make an appearance and have a major impact on the game.

Erne full-back McGloin is expecting another epic battle and is glad to have the opportunity after the game could have gone either way the first time.

“We felt we could have won and lost it the first day and really that game reflects how it has been against Antrim the whole year and down through the years. The draw reflects just how tight it is. They were up by so many points and then we are a point up in the last few minutes. The draw was fair but at the same time there was disappointment for us and for them too,” she said.

“We are looking forward to this game and not really looking back on what might have been in the first game. There is no point dwelling on the other game. Of course you look back and see what areas you can work on but there are a lot of positives as well. Our focus is on Saturday and hopefully we can do it.”

Carey’s sentiments were similar and with a clear area for improvement to focus on, she is hoping they create a similar number of chances but take them this time.

“Both teams had opportunities to win and both could have lost it and we are just glad to get a second bite and not to have lost it.

“We can improve all over but the most obvious was our conversion rate, we did not kick as much as we would have liked compared to the chances that we made and there are plenty of areas for everyone to improve on, even small things in each person’s own game.”

“The win would be a massive boost to the county. We haven’t won an All-Ireland title in 10 years. You talk about getting up to the higher level and provide something for the young girls to look up to and copy. A win would be a good platform to build on.”

Old forces and new worth looking at