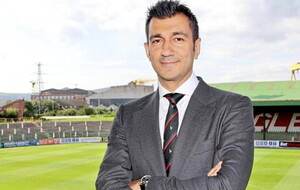 CLIFTONVILLE manager Paddy McLaughlin hailed a “perfect” week for the north Belfast club as they moved into second place in the Irish League table and cut the gap to leaders Larne to just two points.

The weekend before last, the Reds travelled to the Oval and secured a massive win against fellow title challengers Glentoran and they followed that up on Saturday with a comfortable 2-0 home win over Newry City.

Goals in either half from Ryan Curran and Joe Gormley were enough to give Cliftonville all three points on Saturday and, combined with Larne's loss to Coleraine the night before, made for a satisfied vibe around Solitude.

“Larne slipping up on Friday night gave everybody in the chasing pack the opportunity to make up some ground. I'm delighted that we were able to do that because Larne have been absolutely flying in recent weeks and you need to take any opportunity that you're given.

“It was important to us that we followed up the good result against Glentoran with a win. It was great to go away to the Oval last weekend and come back with all three points but, if we hadn't produced the goods on Saturday, then all our hard work at Glentoran would have been undone.

“We've played Newry three times in the last month-and-a-half and they're a good team who know our strengths and weaknesses, so to have won all three games is very pleasing because they're definitely a side that can hurt you.”

Joe Gormley chose the occasion of his 33rd birthday to grab his fourth goal of the season for Cliftonville and McLaughlin said it was only what the veteran striker deserved after a recent barren spell by his high standards.

“Fair play to Joe, it's his birthday too so we're delighted for him to have scored,” the Derry man added.

“Joe's playing well for us and has led the line brilliantly over the last few weeks. I think he's been a bit annoyed that he hasn't been scoring goals, but his performances have been superb.

“Sean Moore showed great maturity in squaring the pass to Joe Gormley for a tap-in. If he takes the strike on and misses it or the keeper saves it – which, in the form he was in, there's every chance he could have – it's a nervous ending to the game and you never know what can happen. But Sean showed great awareness to play the pass and let Joe put the game to bed.”

Elsewhere on Saturday, Linfield and Crusaders played out a goalless draw at Windsor Park, while Glentoran returned to winning ways with a 2-0 win at Portadown. Ballymena United got a 2-0 win on the road at Carrick Rangers, while Dungannon Swifts secured a 1-0 home victory over Glenavon.

CASEMENT Park could have a Belfast competitor for hosting games at Euro 2028 according to a report in yesterday's Sunday Life.

In an interview, Glentoran owner Ali Pour said he has plans for building a new 34,000 capacity stadium in the east of the city and that it could be considered as an alternative to Casement for the joint Irish-British bid to host Euro 2028.

“It wasn't a plan when I first bought Glentoran,” said London-based businessman Pour of his idea for a completely new stadium as opposed to a revamped Oval.

“That was never talked about. We knew we needed a new stadium for Glentoran, basically a new Oval with maybe an 8,000 to 10,000 capacity but then, maybe a year after I bought the club, there was talk of the UK bidding for the World Cup and that's when people started calling me saying ‘you know you are going to build a new stadium anyway, why not make it big enough for a World Cup?'

“In the last few weeks I've been reading that Casement Park is the only viable option,” added Pour of the yet to be rebuilt GAA stadium's inclusion in the proposed joint-bid for 2028.

“All I'm saying is there is another option… Casement is the favoured venue but I have seen plans change at the last minute.”

Lionel Messi: Win over Mexico lifts a weight off our shoulders