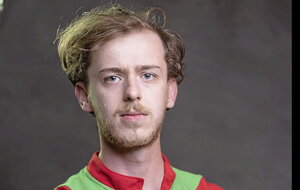 Jack Watson, who plays one of the Glentoran heroes of the Vienna Cup win in 1914.

A TEAM of players all living in close proximity who conquered the summit of European football?

No, not Celtic's 'Lisbon Lions' of 1967, but – more than half a century earlier, the Glentoran team which won the Vienna Cup.

A new stage play, entitled 'One Saturday before the War', tells this amazing tale. Based on the book of the same name and on the highly acclaimed BBCNI documentary 'Belfast's Victory in Vienna', produced by Clean Slate and presented by Holly Hamilton, 'One Saturday before the War' takes to the stage of the Sanctuary Theatre on Castlereagh Street from tomorrow, Thursday, October 6 to Saturday October 15. Tickets are available at www.brightumbrella.co.uk

During May 1914, thirteen workers in the Belfast shipyards disappeared from the scaffolds and the factory floor for two weeks. They were footballers with Glentoran Football Club, a team formed up beneath the gantries of Harland and Wolff, teak-tough yardmen, born and raised between the banks of the River Lagan and the Connswater.

War on the continent was looming, the conversations in the snugs of the local hostelries and church pews were of Home Rule and the very visceral loss of RMS Titanic, a ship they had fashioned with their own hands.

Glentoran were in the ascendency though, the most successful team on the island of Ireland, and their triumph had somehow raised eyebrows all across Europe.

In Vienna, two successful businessmen, Martin Mauthner and Karl Hochman invited the boys of Ballymacarrett to compete in a tournament to be played in Berlin, Prague, Vienna, Bratislava, and Budapest, against the finest club sides in Germany and the Austro-Hungarian Empire. They would be paid handsomely, enough to put decent food on the tables of the houses in the terraced streets of the district.

Nearly all of them lived within a mile radius of each other.

Storm clouds were gathering in the region, The Austrian army were building fortifications all along the Danube whilst the Royal Navy was engaged in daily target practice in the English Channel. Would the lads of Glentoran FC venture into such a maelstrom?

Of course they would.

One Saturday before the War, a team of Belfast footballers took to the field of the Hohe Warte stadium in the Rothschild Gardens of Vienna to contest the Vienna Cup.

They won the game emphatically in the most unlikely of circumstances. The Vienna Cup is today considered by FIFA, the governing body of world football as the oldest remaining European cup in existence and the first to be won by an Irish/British team on foreign soil.

This unlikely adventure would see men who could only wash the grime of the Belfast shipyards away properly at the weekend in the Templemore Avenue baths rub shoulders with German nobility and the highest echelons of the ill-fated Habsburgs.

In a quirk of fate the theatre venue sits less than 150 yards from the homes of two of the players who embarked on the journey of a lifetime 108 years ago.

Their success and the stories that surrounded the adventure were lost almost immediately on their return to Belfast when three months later, 'the war to end all wars' overshadowed everything they had achieved for their city.

Written by Trevor Gill and Sam Robinson and produced by Bright Umbrella Theatre Company, this high tempo stage adaptation is filled with tears and laughter, joy, and despair, with more than a few surprises along the way.

'One Saturday before the War' is played out against a backdrop of conflict and features four of the finest young professional actors on the island, namely Jack Watson, Phillippa O'Hara, Thomas Galashan, and Forrest Bothwell.

The audience for 'One Saturday before the War' is encouraged to come to the show wearing their football colours, the theatre will be bedecked in football flags and banners for the entire run.

For over a century, what happened in Vienna stayed in Vienna. Until now.

The ethos at Bright Umbrella is to entertain, educate and challenge, this show, affords the company the opportunity to attract working class men from east Belfast into the theatre, in a venue situated right on one of the most challenging interfaces in the city.

And don't even begin to ask about what happened to the Glentoran goalkeeper!