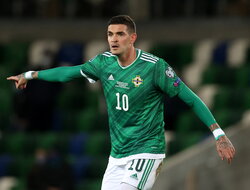 NORTHERN Ireland manager Ian Baraclough has said that "everyone rallies around" Kyle Lafferty despite the apparently sectarian comment the player made about Celtic FC.

Baraclough did also insist that "the cross-community work done by the IFA, and will continue to be done, is something that is backed by everybody."

However, damage has undoubtedly been done by the Kilmarnock striker replying to a fan who said 'Up the Celts' to him with the remark "pack of F----n b-----ds."

Baraclough expressed support for the 35-year-old, who was left out of the NI squad yesterday morning and is the subject of an inquiry into the incident by his club.

The NI boss confirmed that he had spoken to the Fermanagh man, saying: "I'm not going to go into the conversation but it's right that we spoke about things. You have to discuss them. He's a player of ours and there's an attention to detail you have to take care of.

"I can't elaborate on what the [Irish Football Association] statement says, but clearly it's something that we'd rather not be talking about.

"I'm here to support my players. I've always looked at the manager's role as having many facets to it and that includes being a father figure, someone they can turn to and talk to and that relationship will still be there."

Asked if the latest controversy would finish the Kesh man's international career, Baraclough replied: "It's not necessarily the end. It will be reported in some quarters as that and it will be sensationalised but I'm there for Kyle.

"The fact was that Kyle hadn't trained since Tuesday. He's got a back problem and that was something that was part of the thought going behind it as well.

"We're fully focused now. The squad are aware of the situation. Kyle is a popular figure within the group. For me, everyone rallies around him and it's case of looking towards Kosovo, talking about the football side.

The IFA media manager attempted to shut down further questions about Lafferty's latest faux pas but the comment has clearly overshadowed the build-up to this evening's Nations League match against Kosovo at Windsor Park.

The irony is that Lafferty was never going to line out in green today due to a back problem which had prevented him from training since Tuesday.

Yet the import of a Northern Ireland player making such a remark is greater than any Nations League game, even if defeat might leave the hosts facing the real possibility of relegation to the bottom tier of European football, League D.

Asked to clarify if Lafferty's omission from the squad was due to the controversial incident or the injury, Baraclough said: "Through discussions on both things, that's what the statement is there for. You're always going to pick holes in a statement, 'What about this, what about that?', but we're not going to elaborate on it.

"It is now pending an inquiry with his club and it's not for us to state anything on that. I can't elaborate any more."

Pressed to confirm if that meant the IFA was not going to conduct any further inquiry of its own, Baraclough said: "He's not our contracted player. He's with us at this moment in time, but he's contracted by Kilmarnock. They pay his wages, they own his contract and it's for them to conduct the inquiry."

Baraclough was then asked if he appreciated the damage that could be done to the IFA's efforts to rid Northern Irish football of sectarianism:

"Yes, there has been a lot of cross-community work put in by the IFA and it's important that will continue to happen. For me, that is something that is so important for this country going forward.

"I'm not going to elaborate on what I've said about the Kyle situation, because it is now part of an inquiry and that's for Kilmarnock to conduct, so it's wrong to comment on the actual incident itself.

"What I will say is that the cross-community work done by the IFA, and will continue to be done, is something that is backed by everybody."

The 51-year-old from Leicester added that he was well aware of the nature of Northern Irish society, saying: "I understand those complexities. Although I've not lived here growing up, I've lived with what has happened through 'The Troubles' and how society is dealing with what has happened.

"It is a stronger, more together, nation and I can play my part in that by bringing a group of fans together who love supporting Northern Ireland and the football team. If you're winning games of football that makes everybody happy."

The concern ahead of this evening's match would have been that supporters might be calling for Baraclough's head if NI's Nations League winless streak extends to 15 matches.

Now the focus may be on any shows of support for Lafferty, the hero of qualifying for Euro 2016, even though he has not scored for NI for almost six years.

In his absence, the men in green must try to overcome French legend Alain Giresse's side, who won 3-2 in Pristina on June 9, and also won 2-0 in Cyprus, leaving them on six points compared to their hosts' tally of two, from two draws with the Cypriots.

Baraclough does at least have a stronger squad compared to June, with Jamal Lewis, Shane Ferguson, Tom Flanagan, Corry Evans, and Josh Magennis among those available again, while Kofi Balmer has earned a first senior call-up.

Greece have already topped this group, earning promotion to League B, but there are still rankings points to play for here. Indeed if NI finish bottom, below Cyprus, they will go into a relegation play-off.

They are also likely to slip into seedings pot 5 for the Euro 2024 draw next month, which would make reaching that tournament an even harder proposition.