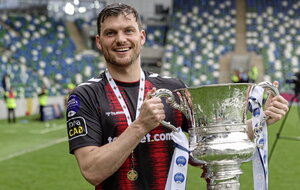 CRUSADERS midfielder Philip Lowry would play football any day of the week – but supports those within the Irish League family who are against Sunday games on religious grounds.

It is understood Crusaders are one of a few clubs who are steadfastly opposed to Sunday football as the Northern Ireland Football League [NIFL] is keen to spread games across the weekend.

Speaking ahead of this afternoon’s White Ribbon NI Charity Shield game between league champions Linfield and Irish Cup winners Crusaders, the much-travelled midfielder said: “I’m up for playing any day of the week. That’s my own personal belief.

“I understand people have different beliefs that don’t allow them to play sport on a Sunday and you’ve got to respect that.

“Certainly from my perspective and the way the league is going, and the way some clubs will be pushing in European competition, then Sundays are inevitable. Linfield are obviously taking that leap this year and playing some games on a Sunday so I’m all for it.

“I enjoy playing on Friday nights as well and the early Saturday games. Anything that can get people through the door and grow the product more I’m all for it.”

Crusaders’ opponents are equally reticent about playing games on a Sunday but have agreed to play their Danske Premier League opener against Portadown on Sunday week due to their Europa League qualifying exertions against Zurich next Thursday night.

Linfield are likely to field a weakened side for today's return of the Charity Shield showpiece after a five-year absence having played their first leg against Zurich less than 48 hours earlier.

The evergreen 33-year-old is now in his seventh year with Crusaders having won a league title, two Irish Cups and two Co Antrim Shields under Stephen Baxter.

Earlier in his career, the Limavady native also spent five fruitful years at Linfield with whom he won three league and cup doubles.

“That’s the expectation on you at Linfield because of the finances and support,” said Lowry, who moved to Derry City for a year after his Windsor Park exit.

“You see players leaving Linfield and their careers can fizzle out and they can’t really cope because there are such demands at Linfield.

“And when you maybe step off that [level] you can get in your comfort zone, but to maintain that at the Crues and get better is highly satisfying.”

Due to working across the water several years ago, it looked as though Lowry’s Irish League career was grinding to a halt. In 2016, he signed a short-term deal with Portadown before Baxter offered him the opportunity to join the Shore Road club.

“The move initially came out of the blue,” he explained.

“I was living in England at the time and I’d actually signed a short term deal with Portadown - kind of randomly to be honest.

“That season went terribly for me because I was getting up, flying back home at crazy hours in the morning and I wasn’t training very much.

“My first game was against Crusaders and I remember it well at Shamrock Park. The next day the phone rang and it was Stephen Baxter to say that he didn’t know I was still playing and asked if I was still interested in playing next season as he’d like to sign me.

“I was moving home to get married and I said I’d give it another year, I’d knuckle down and to be honest I haven’t looked back. We won the league that first year and it’s been a great seven years for me ever since.”

On today’s curtain-raiser, he added: “It’s really about fine-tuning for our first league game next week against Dungannon. It’s a nice occasion and it’s for a good charity [White Ribbon NI, an organisation that challenges the attitudes and behaviours which lead violence against women and girls].

“Linfield against the Crues is always a ding-dong battle so we’re looking forward to that.”