Editorial: Sectarianism must be called out 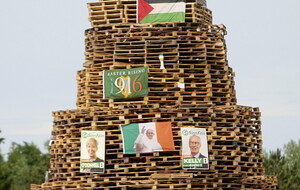 WHAT will it take to end the abhorrent practice of placing sectarian displays on bonfires?

Another Eleventh Night has brought with it another depressing array of images of bonfires bedecked in nationalist flags, election posters and threatening slogans.

In Cregagh in east Belfast, Sinn Féin and Alliance posters sat alongside banners directing sectarian and misogynistic abuse towards Michelle O'Neill and the sinister threat 'All taigs are targets'.

At Highfield in the city, a Sinn Féin councillor told how he had to field questions from his children about why "daddy is on a bonfire to be burnt".

In Glencairn, where a bonfire threatened to topple onto a healthcare centre, it proclaimed 'Kill all taigs' and posters included that of SDLP councillor Paul Doherty, founder of a food bank helping people struggling to feed their families.

An image of Pope Francis was also put on a pyre on the Shore Road, while GAA flags featured on bonfires outside Belfast.

This week's displays did prompt vocal condemnation from some unionists, with UUP leader Doug Beattie describing the Cregagh bonfire as "utterly disgraceful", and DUP MLA David Brooks saying "there is no place in our culture for the pathetic scrawled messages".

So, having become accustomed to seeing my posters burned on bonfires, I honestly thought nothing could shock me anymore. However, late last night I received photos of effigies of me, @moneillsf and @MaryLouMcDonald hanged on the bonfire at Glenfield in Carrickfergus. >

Mr Beattie has also spoken out courageously in the past about the need for bonfire regulation following several accidents and near misses involving people and property.

Sadly this Twelfth period saw a man fall to his death while building a bonfire in Larne.

The Fire and Rescue Service attended 35 bonfire-related calls, down on the previous year, but once again found itself in the ludicrous situation of hosing down buildings to prevent damage but unable to turn jets on the heat source itself.

The PSNI confirmed it had received complaints about flags, effigies, election posters and other emblems being placed on bonfires, but added only that it was "gathering evidence... to establish whether offences have been committed".

It is also investigating damage to flags and bunting erected for a Twelfth event in Castlecaulfield, Co Tyrone.

If the deep-rooted problem of sectarianism is ever to be tackled in Northern Ireland, a strong and united message must sent out by all politicians and community leaders that hate crimes of any kind, regardless of their source, will not be tolerated.

While only a minority may be involved in such actions, they continue year after year because a majority appear to tolerate their behaviour.