Downing Street has signalled that it will push ahead with its massive package of tax cuts even as the pound plunged to an all-time low against the US dollar amid hammered market confidence in the government’s economic plans.

Sterling hit its lowest level against the dollar since decimalisation in 1971, falling by more than 4% to just 1.03 dollars in early Asia trading before appearing to settle at around 1.07 dollars by early this afternoon.

The euro also hit a fresh 20-year low against the dollar amid recession and energy security fears ahead of what is expected to be a painful winter across Europe as the war in Ukraine shows no sign of ending. 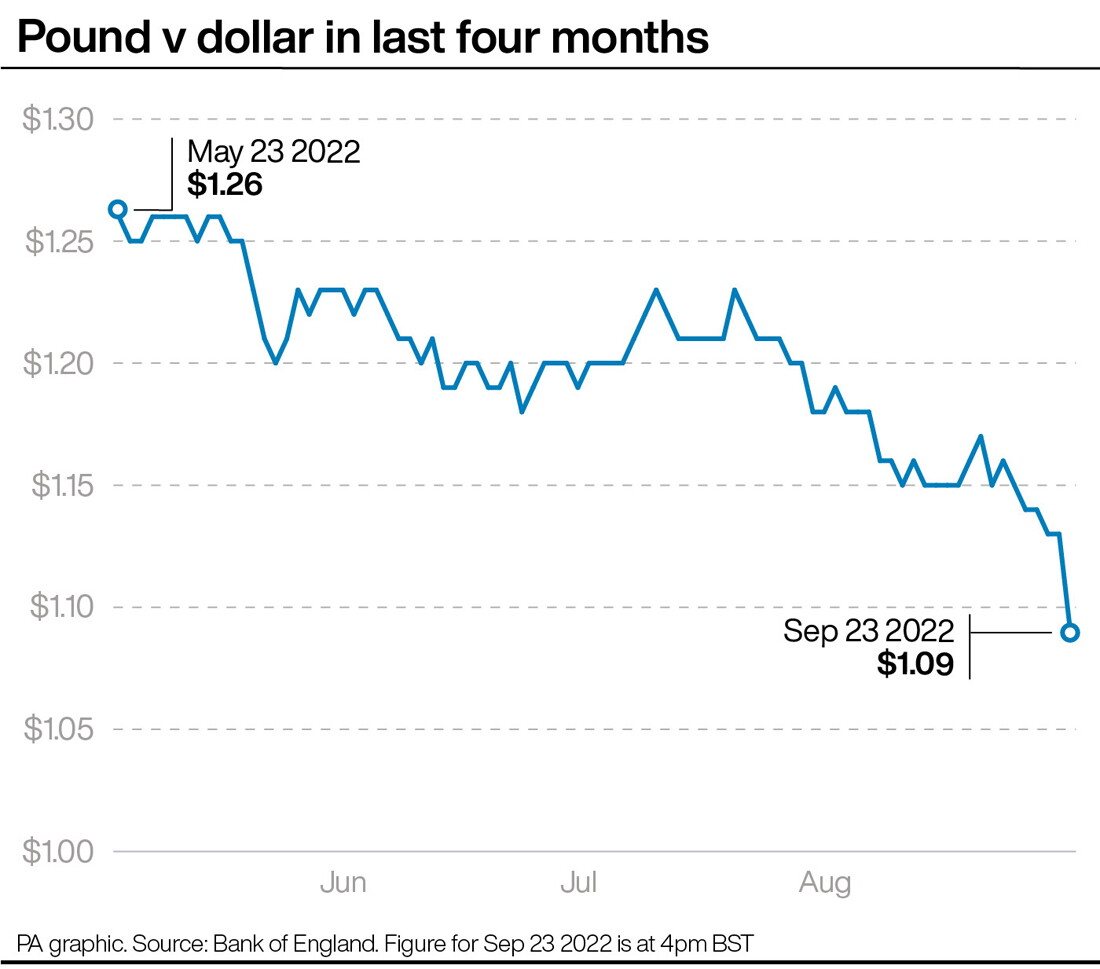 Experts warned the pound’s plunge towards parity with the dollar will send the cost of goods soaring even higher, potentially worsening the cost-of-living crisis, while it also means it will be more expensive for the Government to borrow money.

Neither Chancellor Kwasi Kwarteng nor Liz Truss are currently expected to publicly address the major market shift, with the prime minister’s official spokesman telling reporters today that Downing Street would not be commenting on market fluctuations.

He said: “I think that the Chancellor has made clear that he doesn’t comment on the movements around the market, and that goes the same for the prime minister.

“The UK with the second lowest debt-to-GDP ratio in the G7 is investing in its future. That’s through a growth plan while remaining fiscally responsible and committed to driving down debt in the medium term.

“The growth plan, as you know, includes fundamental supply side reforms to deliver higher and sustainable growth for the long term, and that is our focus.”

Nonetheless, financial markets have been dominated by speculation that the Bank of England may need to increase rates by as much as one percentage point to 3.25% to steady the falling pound, less than a week after a rate rise to 2.25% and before its next scheduled meeting in November.

The Chancellor, the Downing Street spokesman said, speaks “regularly” to the Governor of the Bank of England, but declined to say whether Mr Kwarteng planned to arrange a meeting as a matter of urgency.

“I’m not aware of any change to that regular series of meetings that they have which the Chancellor set out over the weekend,” the spokesman said.

The Labour MP told Times Radio: “Instead of blaming everybody else, the Chancellor and the prime minister, instead of behaving like two gamblers in a casino chasing a losing run, they should be mindful of the reaction not just on the financial markets but also of the public.”

She added: “They’re not gambling with their own money, they’re gambling with all our money, and it’s reckless and it’s irresponsible as well as being grossly unfair.”

Mr Kwarteng has previously brushed off questions about the markets’ reaction to his mini-budget – which outlined the biggest programme of tax cuts for 50 years – after it was announced on Friday using more than £70 billion of increased borrowing.

He claimed yesterday the cuts “favour people right across the income scale” amid accusations they mainly help the rich.

It is understood that the Treasury has nonetheless been speaking to investors behind the scenes to reassure them.

Susannah Streeter, senior investment and markets analyst at Hargreaves Lansdown, said: “Comments by Chancellor Kwasi Kwarteng that he will go even further with historic tax cuts, which are already being criticised as reckless, have added to the anxiety.

“The worry is that not only will borrowing balloon to eye-watering levels, but that the fires of inflation will be fanned further by this tax giveaway, which offers higher earners the bigger tax break.”

The pound’s tumble makes it more expensive to import goods and commodities, such as food, clothes, oil and gas.

It is also seeing the cost of UK borrowing surge higher – last week rising by the most in a single day for at least a decade after the mini-budget as it impacted upon Government bonds.

“There is now a tense stand-off between the Bank of England and the Treasury, with policymakers determined to try to bring down inflation by dampening down demand, while politicians are focused intently on trying to boost demand and promote their growth agenda,” said Ms Streeter.

Mr Kwarteng and Ms Truss have defended their growth plans package, despite analysis suggesting the measures, which include abolishing the top rate of income tax for the highest earners, will see only the incomes of the wealthiest households grow while most people will be worse off.

Three days after his fiscal statement, the Chancellor indicated his announcements were just the beginning of the Government’s agenda designed to revive the UK’s stagnant economy.

Mr Kwarteng and Ms Truss could continue their spree in the New Year with possible further reductions in income tax and the loosening of immigration rules and other regulations.