Tony Blair: Donegal grandmother told me not to marry a Catholic 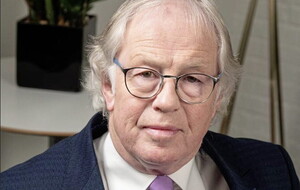 Former British prime minister Tony Blair has spoken of how his staunchly Presbyterian grandmother warned him not to marry a Catholic, with him saying: "I didn’t actually have the heart to tell her at the time that I was going out with one.”

In an interview with journalist Eamonn Mallie, Mr Blair reminisces about holidays in Donegal where his grandmother, Hazel Corscadden, ran a hardware shop in Ballyshannon.

The former Labour leader also says he believes the Good Friday Agreement is currently "not working as it should" but says the peace secured by the 1998 accord will prevail.

Mr Blair calls for flexibility in resolving issues around the protocol, urging both sides to "take the ideology out of it".

His remarks come in an hour-long interview with Mr Mallie to be screened tonight.

‘Eamonn Mallie Face to Face with...’ coincides with the upcoming 25th anniversary of the Good Friday Agreement.

The former Labour leader reflects on his involvement in the peace process, as well as giving insights into the personalities involved.

He also shares memories of childhood family holidays spent in Co Donegal, and recounts how, on her deathbed, his staunchly Presbyterian grandmother had a message for him: “Whatever else you do son, don’t marry a Catholic… And I did….I didn’t actually have the heart to tell her at the time that I was going out with one.”

Mr Blair, whose wife Cherie is Catholic, converted to Catholicism in 2007.

Mr Blair explains his desire to help resolve the conflict in the north and he shares details on several key points in the process – including his relationship with Bill Clinton and the role he played in speaking one-to-one with David Trimble and Gerry Adams.

Asked if the Good Friday Agreement is working, he responds: “It has worked in a way, mostly, but it’s not working as it should at the moment.”

On the protocol, he states: "If both sides are flexible and you take the ideology out of it… if you approach this in a practical way, you can find a solution."

:: ‘Eamonn Mallie Face to Face with Tony Blair airs on UTV at 9pm.