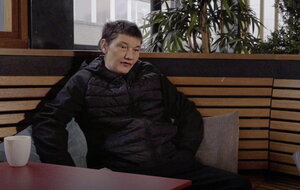 Sean from west Belfast said he faced homelessness after a relationship breakdown.

TWO leading charities have called for a greater mental health focus on tackling the “catastrophic” impact of homelessness.

A joint report from Simon Community NI and Depaul was launched at Belfast City Hall yesterday, showing almost 70 percent of those experiencing homelessness had experienced a mental health condition.

The survey also found the overwhelming majority (84 percent) had been diagnosed before becoming homeless.

Political leaders have now been urged to stop treating the problem as a housing issue alone.

Sharing their experiences of homelessness, Patricia and Sean from Belfast spoke of how their struggles with addiction, mental health and addiction were linked.

Now in permanent accommodation and married for two years, Patricia said after growing up in the care system she suffered flashbacks in her twenties which led to addiction.

“That was me on the street. I do believe if I had had that help I would have maybe taken a different path in life," she said.

Sean from west Belfast said he faced homelessness after a relationship breakdown.

Sean (41) was homeless on and off for 16 years following a relationship breakdown, staying in temporary accommodation, night shelters and on the street.

Now living in permanent accommodation for three years, he has struggled with anxiety and depression and is supported by the Simon Community.

“It was a family disagreement, the family background. If you don’t deal with your mental health, your homeless life is going to become worse. It goes hand in hand,” he said.

“If you get the right help at the right time for your mental health you mightn’t become homeless, you might be able to work on your problems and maybe resolve your issues with your family.”

He said challenges included getting a GP appointment without a fixed address.

Simon Community NI Chief Executive Jim Dennison said the “stigmatising and isolating” effect of homelessness was often a cause of mental illness.

He called for a legal obligation for greater cooperation between statutory bodies tackling housing, health, social care, justice and education.

Derry shooting victim may never get over mental and physical scars, police say

‘Flipped fortunes' in weather as Highlands warmer than south-east England