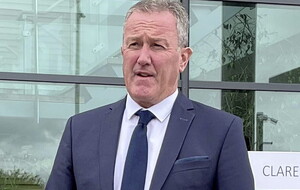 THE DUP's continued boycott of the power-sharing institutions was last night being blamed for expected cuts to Stormont departments after the secretary of state set out a budget for the current financial year.

Chris Heaton-Harris warned that a lack of financial planning meant the education sector was facing a particular challenge to meet spending targets.

A pay increase for public sector workers is also unlikely to meet previous expectations, while the secretary of state has signalled the potential for introducing water charges if the institutions are not restored next year.

In his written ministerial statement, Mr Heaton-Harris said he had a "clear message" for Stormont's parties: "If they disagree with my budget, they should restore the executive to consider and revise the departmental position I have set out."

The secretary of state said his budget would "protect spending to address the critical health pressures" and that a range of school programmes "which support those who need it most" would be maintained due to an additional £286 million on top of last year's spending.

"However, even this level of increase will require significant reductions in current spending trajectory levels to live within budgetary control totals," he said.

Former Sinn Féin finance minister Conor Murphy said Stormont departments were "struggling to control spending" due to the DUP’s refusal to allow the executive to set a budget before its collapse ahead of the party's continued boycott.

"This is hugely damaging for public services, particularly the health service which desperately needs financial certainty." he said.

The Newry and Armagh MLA said crucial support to businesses had been "denied by the DUP’s blockade of the executive".

"Consequently, companies will undoubtedly go out of business and jobs will be lost," he said.

Mr Murphy said he had "stopped the imposition of water charges" when regional development minister and that their introduction would "only add to the cost of living and the cost of doing business".

SDLP leader Colum Eastwood blamed a "disastrous mix of fiscal incompetence and political recklessness" for a budget which he said gave Mr Heaton-Harris "cover to make cuts to critical areas of public spending".

“Further pain is not inevitable, power that should never been given to him can be removed from the secretary of state but it requires the DUP to acknowledge that the consequences of their protest are now inflicting unsustainable pressure on ordinary people, and on the education of our children," the Foyle MP said.

Alliance deputy leader Stephen Farry said the absence of the institutions was "allowing opportunities for long-term planning to be missed".

"Today’s statement provides a basis for the continuity of public services, but with the current governance gap, there is little scope for strategic decisions to be taken to reform public services to make them more sustainable," he said.

Man dies after being struck by lorry in Waringstown, Co Down