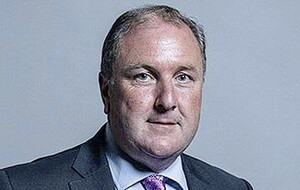 THE effectiveness of the institutions established under the Good Friday Agreement is to be examined by a Westminster committee to coincide with the accord's 25th anniversary next year.

The Northern Ireland Affairs Committee is asking for the views of "people from all walks of life" on the performance of the bodies created by the 1998 deal, including the executive and assembly.

The group of cross-party MPs is welcoming the public's suggestions on how the devolved institutions may be improved.

The committee's inquiry will also examine what impact the Good Friday Agreement has had on UK-Irish relations over the last quarter of a century and whether people who do not identify as unionist or nationalist are served well by the deal.

Committee chairman Simon Hoare described the agreement as the "bedrock of peace" and said it should be celebrated and recommited to "each and every day".

"Next year provides an opportunity both to mark the occasion but also to review how it has worked, what it has achieved and where it could improve outcomes," he said.

"The anniversary of its signing comes during a period of increased tensions that everyone is committed to easing.

"We will examine how we can maximise the peace and prosperity benefits of the agreement for Northern Ireland, and we want to hear your views on how that can be done.”

SDLP MP Claire Hanna said the committee's work was an "appropriate and timely look at the institutions".

"The values at the core of consensus in 1998 were partnership, interdependence and compromise and they remain as relevant and necessary as ever but, as operated, some of the structures appear to be locking in dysfunction and intransigence, and others are being paralysed by one party at a time," she said.

"The agreement has provision for review and renewal and it is important that this is done in an open way and not behind closed doors like at St Andrews, which made progress harder."

The committee is particularly keen to hear opinion on the extent to which the design of the internal, strand one institutions has succeeded in enabling cross-community, effective and stable government.

The MPs would also like to hear views on whether the strand one institutions have enabled those who identify as neither unionist nor nationalist to be effectively represented and the the extent to which the design of the strand two North/South Ministerial Council has succeeded in developing cooperation between the Stormont executive and the Dublin government.

Evidence is welcome on the extent to which the design of the strand three, east-west institutions has succeeded in developing cooperation between the UK and Irish governments; how the institutions might be reformed to address current challenges; and what mechanisms could be used to initiate any changes to the institutions of the agreement.

The closing date for submissions of evidence 5pm on December 8.

Senior Down and Connor administrator passes away