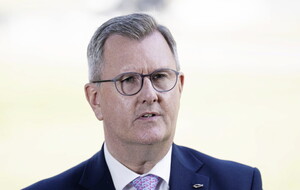 The DUP leader's remarks relate to the inclusion of a Queen's logo on a new academic report entitled 'Making the case for Irish Unity in the EU'.

The authors of the report include Professor Colin Harvey, whose appointment to a Stormont consultative body on a Bill of Rights was blocked by the DUP last year.

The report is presented as "an independent legal and academic report" which was commissioned by The Left in the European Parliament Group.

Sir Jeffrey said he would be raising the matter with the Queen's vice-chancellor at a meeting.

On Twitter he commented: "Use of the university logo on this report is very worrying. Our universities should be above partisan politics," he said, adding the DUP's student wing in the university had recently reported "some very worrying cases of intimidation against unionist students."

Professor Harvey, who is a board member of civic society group Ireland's Future and has previously spoken about being the subject of a "targeted campaign" of online abuse from unionists, responded: "Why not try talking to me directly first?"

DUP MLA Edwin Poots said it was "wholly inappropriate" for the university's branding to be used on "such a divisive issue."

"Where are the efforts on dealing with the unionist chill factor that has been evident for years?" he said.

However, Brian Feeney, a history academic and columnist with The Irish News, said Queen's needed to "robustly defend academic freedom by openly rejecting the repeated unionist attacks on one of their most respected human rights professors".

A Queen's University spokesperson said: "The vice-chancellor and senior members of the university staff will be meeting with Sir Jeffery Donaldson.

"We look forward to addressing any concerns during this engagement."