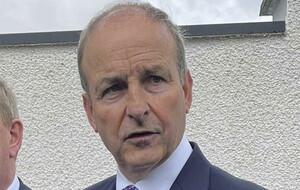 MICHEÁL Martin has welcomed comments by Northern Ireland Office (NIO) minister Steve Baker which appear to signal a more conciliatory tone from the British government ahead of a resumption of talks with the EU later this week.

European Commission spokesman Daniel Ferrie confirmed the two sides will meet for the first time since February for technical level talks, adding that Brussels will approach them "constructively" and that the bloc remains "committed to finding joint solutions".

Mr Baker, a former European Research Group chair who was appointed Minister of State in the NIO last month, said he was "convinced" a deal could be agreed if the talks were without pre-conditions and "together in a spirit of goodwill".

At the weekend the strident eurosceptic apologised for some of his behaviour towards the Irish government and the EU during the Brexit process.

He told the Tory conference that he and others did not "always behave in a way which encouraged Ireland and the European Union to trust us to accept that they have legitimate interests".

"I am sorry about that," he said, adding that ministers needed to act with "humility" to restore relationships with the Republic and the EU.

The taoiseach welcomed the tone of Mr Baker's "upfront" comments.

"I think they were honest and very, very helpful," the Fianna Fáil leader said.

"And I look forward to continuing engagement with minister Baker and others within the British government."

Mr Baker told RTÉ that he was happy to eat humble pie in a bid to improve the broken relationship between Britain and Ireland.

"I'm very convinced that, if we get into a negotiation, without pre-conditions, and together in a spirit of goodwill, we can de-escalate this problem and we can get a deal which works for everyone, respecting everyone's legitimate interests, north-south and east-west," he said.

Mr Baker said his motivation for his apology was to try to get a "deal that works".

"While it’s impossible to undo the damage caused by Brexit, there is a real opportunity to reach a negotiated settlement with the EU to protect Northern Ireland from the worst outworkings of Brexit and to allow us to avail of economic opportunities the SDLP has identified and championed within the protocol," she said.

"Steve Baker’s words can provide a welcome change in atmosphere as technical talks resume between the EU and UK this week."

Agriculture Minister Edwin Poots, who is facing court action over his decision to halt checks on goods arriving from Britain at the north's ports, claimed the NIO had "persuaded" Mr Baker to apologise.

"RoI has pressed for the imposition of barriers to NI consumers, driven costs of retail goods higher and used photos from the 70s in a misleading way," he tweeted..

"It is the people of NI who need matters put right."

His DUP colleague Ian Paisley said the focus needed to be on " solutions to remove the protocol" rather than what he termed "haphazard apologies".

"The protocol has set Northern Ireland back decades – it was imposed against the wishes of unionists and has now led to the collapse of the institutions," he said.

"We’re less interested in haphazard apologies and more focused on solutions to remove the protocol."

Gun attack in west Belfast social club could have killed others, police say