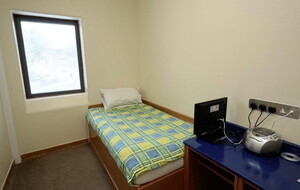 A cell at Woodlands Juvenile Justice Centre in Bangor, Co Down

Criminalising children as young as 10 is not in their best interests, the minister said as she launched a public consultation on the issue.

Close to one third were aged 14 or younger, double the percentage of five years ago. Of the 126 children held in detention at Woodlands Juvenile Justice Centre over the course of the year, 18 were aged between 10 and 14.

But the number detained decreased from 160 the previous year.

Over the five-year period the biggest change in the proportion of admissions was among those aged 10-13, from 2.3 per cent to 7.4 per cent. In total, there were 298 admissions as some individuals were detained several times.

Northern Ireland’s minimum age of criminal responsibility (MACR) is one of the lowest in Europe. The UN Committee on the Rights of the Child recommend a minimum age no lower than 14, with a preference for a higher age of 15/16.

Under the current age of criminal responsibility rules, children aged 10 can be held criminally responsible for their actions and may face arrest, prosecution, trial and sentencing.

Minister Long said: “I do not believe that criminalising children as young as 10 is in their best interests, and this view is shared by many.

"I have long advocated for an increase in MACR, because I believe such young children should not be drawn into the youth justice system, particularly when research shows that early contact with the justice system often has a negative long-term impact on their lives.

The consultation period will run from October 3rd to December 23rd.