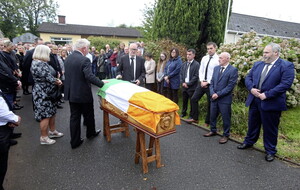 The McAnespie family pay their final respects to their father John as they prepare to leave the family home for requiem mass in St Mary's Church Aughnacloy, Co Tyrone.

A FAMILY photograph, a late son’s football jersey, a fiddle, a spirit level and an image of Pope John Paul II - symbols representing the passions of a man’s life - were displayed at his funeral yesterday.

John McAnespie, from Augnacloy in Co Tyrone, was laid to rest following a service in St Mary’s Church.

While the congregation heard how he had suffered losses, including the 1988 fatal shooting of his son Aidan, the early death of daughter Eilish and his wife Lizzie, Mr McAnespie lived on with “great dignity, kindness and respect” for others, Fr Cathal Deveney said.

Mr McAnespie was described as an independent thinker, remembered for hanging black flags following Bloody Sunday and later supporting Eilish as she ran as a Sinn Féin council candidate in the mid-1980s.

A tricolour flew at half mast outside the family home on the Tullyvar Road. It was then placed on the coffin for the procession to the church.

The 87-year-old great-grandfather, who died earlier this week, was interred in St Patrick’s Cemetery, Clara, following the morning service. Mourners included first minister-designate Michelle O'Neill, along with representatives from Relatives for Justice, the organisation his daughter Eilish helped found.

As the symbols of his life were carried forward, Fr Deveney explained their significance.

The image of him surrounding by family revealed what was of most importance to him, the spirit level and trowel his enjoyment of his work as a tiler and plasterer and his son Aidan’s GAA jersey reminding all of his 30 year fight for justice after the young man was shot dead by a British Army soldier - and his love of football.

Naming the local GAA Club after his late son was a source of "comfort and consolation".

The fiddle was a symbol of his love for Irish music and culture, the image of John Paul II and his rosary beads representing strong faith – and his hat, just because it rarely left his head in the light of day.

"As we see from the picture that was brought up, he loved his family and his family loved him," said Fr Deveney. "John was a hard worker, known and appreciated for his work ethic, as a builder, plasterer and tiler. He always made sure the job was done."

He was a “gentleman” always with a twinkle in his eye and ready with words of encouragement and counsel. “He was a gentle, strong presence."