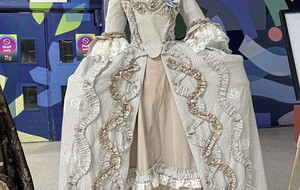 The exhibition includes dresses, hats and accessories, as well as men’s clothing that would have been worn at court or by nobility of the time. Picture by Hugh Russell

A BRIDGERTON inspired costume exhibition has opened in Belfast city centre promising to transport visitors "to the sumptuous surroundings of the Regency era".

The exhibition of French-inspired Rococo fashion by Czech-born costume designer Pavel Jarab will remain open at 2 Royal Avenue until Tuesday, giving people the opportunity to see the extravagant exuberance of the `Bridgerton' period up close.

Pavel Jarab said: "I've lived in Belfast for eight years and the history, nature and architecture of this city, including 2 Royal Avenue, have been a key influence in my recent work. It's a privilege to be able to showcase my work in the city that has inspired me so much.

"The pieces on display include dresses, hats and accessories, as well as men's clothing that would have been worn at court or by nobility of the time."

Belfast Mayor Christina Black said: "These costumes are really exceptional and I think it's fantastic that they're on display in this very fitting city centre venue.

"I'd encourage people to pop in on their way past or stop by on their lunch hour to see Pavel's wonderful artistry. Since we opened 2 Royal Avenue at the end of last year, it has hosted such a wide variety of events for people of all ages and interests, and this is no exception.

"I think it's particularly fitting that these impressive costumes are going to be shown in such a special heritage building with so much history of its own, here in the heart of Belfast."