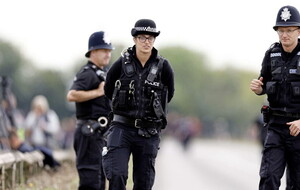 The PSNI sent 53 officers to London to join 10,000 others taking part in the security operation for the Queen's funeral. Picture: Steven Paston/PA Wire

THE PSNI has confirmed that 53 officers were redeployed to London as part of a huge security operation for Queen Elizabeth's funeral.

Operation London Bridge, as the arrangements were officially known, saw around 10,000 officers and staff on duty including 3,000 from UK police forces.

Led by the Metropolitan Police, it has been described as the biggest ever security operation in the UK.

A Met spokesperson said that a total of 69 people were arrested as part of the policing operation.

This included five arrests for assault, three for assault on police, ten for public order and five sexual offences.

No further details were available from the PSNI on the rank of officers involved or the total cost of the temporary redeployment.

Many officers were needed in a general patrol capacity while specialist firearms officers including rooftop snipers were also involved.

Along with ensuring the safety of thousands lining the streets of London, considerable resources were also needed to protect world leaders and dignitaries including the US President Joe Biden.

“Thanks to my Police Service of Northern Ireland colleagues from various ranks and roles who are supporting the Metropolitan Police’s biggest ever safety/security operation”.