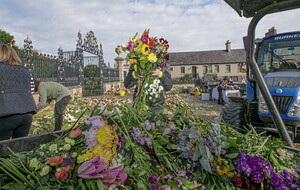 About 40,000 bunches of flowers placed outside Hillsborough Castle following the death of Queen Elizabeth. Picture by Hugh Russell.

Staff at Hillsborough Castle in Co Down started a major clean-up operation this morning after thousands left flowers at the gates to mark the death of Queen Elizabeth.

Starting at 7am, Head Gardener Claire Woods led a team of ten to relocate the flowers throughout the estate.

Potted plants were moved to a glass display house which currently holds a collection of plants such as scented geraniums and “a magnificent passion flower”.

Wreathes and tributes in foam were relocated to the South Terrace, which is near a magnolia planted by the Queen after her coronation in 1953.

The remainder of the considerable floral tributes were then placed by birch trees at the lake, the Betula ermanii planted by the Queen and the Duke of Edinburgh in 1991.

Groundskeepers will also make use of the enormous volume of flowers by using them for compost once they deteriorate.

As the official residence of the royal family in Northern Ireland, the Co Down village became the focal point for huge crowds wishing to pay their respects.

During the visit from King Charles last week, roads came to a standstill and a major transport operation was launched to bring in the many visitors who brought with them flowers and other tributes.

Following the Queen's funeral yesterday, the period of of official mourning in the UK has now drawn to a close but the royal family will observe a further week of mourning.

Flags will remain at half mast at official royal residences until September 27, but are now at full mast at UK government buildings.