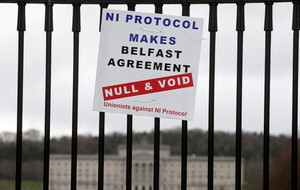 The DUP has boycotted the executive and assembly over its concerns around the protocol. Picture by Mal McCann

JULIAN Smith has warned Liz Truss that continuing to take a hardline with Brussels over the protocol will increase support for a united Ireland.

The former secretary of state's warning came as he urged the new Tory administration to find a "pragmatic" solution to the protocol impasse or risk "months of instability" and a trade war with its biggest external market.

The MP for Skipton and Ripon, who served as secretary of state for seven months up to February 2020 before being sacked by Boris Johnson, said the British government's "relentless and complete focus on Brexit purity" would lead to an increasing number of voters "deciding that the UK is no longer acting in their best interests".

Writing in The Times, he said the new prime minister's first days in office "give her the space to show that she cares about the issues of the protocol and seriously and solemnly wants to resolve the impasse".

He said a new generation of Stormont politicians had been left "impotent by the continued stand-off on the protocol" in the face of impending energy crisis.

"The energy price onslaught is particularly acute in Northern Ireland, with its reliance on heating oil, lower-than-average household incomes and an economy dominated by small businesses," he wrote.

Mr Smith, who together with the Republic's Foreign Affairs Minister Simon Coveney oversaw the deal that restored the institutions in 2020, said the combination of cost of living crisis and the "longest hospital waiting lists in the UK" meant the need to get Stormont back was even more pressing.

He said unionism has "real and valid concerns" with aspects of the protocol and that both the EU and UK needed to "seek practical solutions that address these concerns and those of businesses based on either side of the Irish sea".

"They need to show that the concerns of unionism can be broadly met, and that the protocol can protect the EU single market but also maintain the two-way opportunities that so many Northern Irish businesses benefit from and want to maintain," he said.

"But in acknowledging the issues of the protocol and the need to resolve them, it is time for the Conservative party and the new prime minister to recognise that any solution will have to be a pragmatic one."

He said the alternatives are "stark" - including "months of instability while the protocol bill works through the House of Lords, continued lack of an executive at Stormont, and continuing tension after the bill’s passage as the EU insists on its management of customs and borders".

He noted that Liz Truss and the EU have explicitly said they "want a negotiated solution to the protocol impasse" and that any resolution must "meet the needs of the region as a whole".

Mr Smith said restoring devolution is "both in the interests of worried citizens across Northern Ireland and in the long-term interests of preserving the union".

What happens next? Day by day after Queen Elizabeth's death