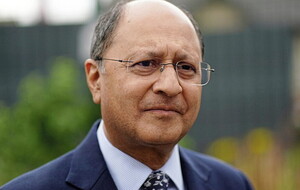 MP CHRIS Heaton-Harris was named as the new Secretary of State last night after Shailesh Vara was sacked after just 62 days in post.

His appointment to the role by new Prime Minister Liz Truss was confirmed last night.

While it was reported several high-profile Conservative Party figures including Sajid Javid and Penny Mordaunt had turned down the role, Mr Heaton-Harris was hotly tipped for the job.

Mr Heaton-Harris, who elected MP for Daventry in May 2010, is a former chairman of the influential pro-Brexit European Research Group and has been described as "a fierce Eurosceptic" and is close to Liz Truss.

A former MEP between June 1999-2009 he held various positions including Chief Whip of the British Conservatives from 2001-2004.

Before entering politics he ran his family’s wholesale fruit and vegetable business for eleven years and is a qualified soccer referee.

Most recently he was Parliamentary Secretary to the Treasury, Chief Whip, after being appointed in February.

Prior to that he was minister of state at the Foreign, Commonwealth and Development Office.

Speculation about his appointment was growing hours before Shailesh Vara revealed on Twitter that he had been sacked.

"Great privilege and honour to serve as Secretary of State at the Northern Ireland Office and work with some excellent people," he wrote.

"My best wishes to the new PM and I look forward to supporting the government from the backbenches".

Mr Vara, a supporter of new Prime Minister Liz Truss's rival Rishi Sunak in the Tory leadership contest, was not expected to hold on to his position.

He was appointed to the role in July after his predecessor Brandon Lewis resigned.

With just 62 days in the job Mr Vara is the shortest serving Secretary of State ever.

Meanwhile, newly appointed Foreign Secretary James Cleverly is expected to take charge of negotiations with the EU over the Northern Ireland Protocol in the coming weeks months.

The protocol, which puts a border down the Irish Sea, is bitterly opposed by unionists who are refusing to return to Stormont unless it is removed.

Former Secretary of State Brandon Lewis has made it back into the cabinet and has replaced Dominic Rabb as justice minister.

After initially backing Nadhim Zahawi in the leadership raced he endorsed Liz Truss at the start of August.

Fire fighters, health workers to be balloted on strike action over pay