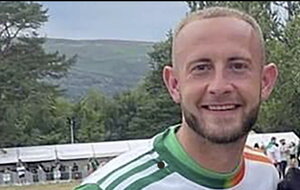 Larne FC player John Herron was suspended by the club

A LEADING car dealership has suspended a member of staff amid claims that she took part in pro-IRA chanting.

The Agnew Group, which has outlets in Belfast and Portadown, said it was investigating the incident after footage emerged on social media.

The chanting is understood to have happened during last week's Féile an Phobail in west Belfast, which has been criticised for hosting concerts by the pro-republican group the Wolfe Tones.

West Belfast rappers Kneecap also faced criticism for unveiling a mural during the festival that featured a police Land Rover being petrol bombed.

A statement from the Agnew Group said the company was an "inclusive organisation employing people from all sections of the local community".

"We do not condone any behaviour of a sectarian or discriminatory nature and this content on social media does not reflect our company or our values," the company said.

"The individual concerned has been suspended pending further investigation."

The suspension comes just weeks after a number of men faced the sack when footage emerged of them mocking the death of Michaela McAreavey.

The daughter of Tyrone manager Mickey Harte was murdered while on honeymoon in Mauritius in 2011.

There was widespread outrage when the clip emerged showing men singing the insulting song at a gathering at Dundonald Orange Hall.

Two of those dismissed are understood to bringing claims of unfair dismissal.

Earlier this week, Irish League side Larne FC suspended former Celtic player John Herron after he was pictured on social media wearing a t-shirt with a pro-IRA slogan.