Burning of emblems on Derry bonfire being investigated as hate crimes 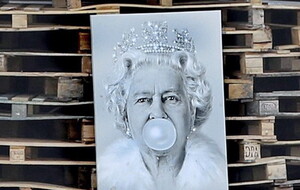 An image of Queen Elizabeth was included in materials being torched at the Meenan Square bonfire on Monday night. Picture by Margaret McLaughlin

POLICE in Derry have confirmed they are treating incidents reported at an internment bonfire in the Bogside area of the city as hate crimes.

Numerous reports were made to police concerning the pyre in the Meenan Square area that was lit on Monday night after it was festooned with flags, slogans and poppy wreaths.

Officers also received reports of "loud bangs" being heard in the vicinity of the bonfire and are probing the possibility of shots being fired.

The bonfire has been condemned by Derry and Strabane mayor Sandra Duffy, who described the torching of symbols as "totally wrong", while Bishop of Derry, Donal McKeown, said scenes from the event were just the tip of an "iceberg" of sectarianism across the north.

Speaking of complaints received on the Bogside bonfire, which included union flags, loyalist flute band flags, and an image of Queen Elizabeth on the pyre, PSNI Superintendent Willy Calderwood said the reports were being treated as hate crimes and officers were working to identify those responsible.

"Potential offences include the theft and destruction of political material, flags, banners, hate slogans and poppy wreaths," he said.

"As part of our enquiries, we have gathered and secured evidence of potential offending and we will engage with the Public Prosecution Service who will ultimately have responsibility for decisions in relation to prosecution.

"The vast majority of people celebrate their culture peacefully and lawfully, and do not want cultural celebrations to be undermined by anti-social behaviour, criminal activity or hate directed towards others."

He added: "I’m appealing for anyone with any further information, but specifically information on those who may have been responsible for the potential offences to provide it to us to bring those responsible to justice".

Superintendent Calderwood added that reports of loud bangs were made shortly before 11.30pm.

"Enquiries continue to establish exactly what occurred and to confirm if any shots were fired," he added.

Ms Duffy of Sinn Féin said such bonfires were "displays of hate" that are "not representative of the people of this city".

"Events of recent days in the city have been a setback after what has been a hugely positive summer for both Derry and Strabane," she said.

"Just weeks ago, thousands of people from across the world visited here for the Clipper Festival and to take part in the Foyle Cup, and I think it’s fair to say the place was buzzing."

She added: "That is the real image of Derry, a city moving forward and focused on the future."

Meanwhile, speaking on BBC Radio Ulster yesterday, Bishop McKeown warned it was wrong to only highlight the actions of a few when "we sit on a whole iceberg of sectarianism here".

He added: "I'm angry this morning if we only condemn a few young people and actually miss the point that sectarianism is much more widespread than we want to admit".