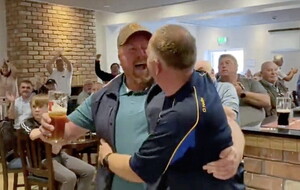 The Portaferry-born middle distance runner played camogie for her local club when younger, while her father Chris 'The Hunter' Mageean is a former Down hurler.

St Patrick's Portaferry is due to face Breda this Saturday at Carryduff in latest round of Senior Hurling Championship matches.

Coiste Chontae an Dúin described Sunday's medal winning performance in the Women's 1500m as a "great achievement" and extended congratulations to her family and to the Gaels of Portaferry.

"Ciara has always been a good friend to Down GAA and we look forward to seeing her at home again and attending our Championship Fixtures in the weeks ahead," the Down GAA statement said.

"The snug bar was packed out to see an incredible run from Ciara which she achieved an season best," the tweet said.

Meanwhile, Athletics NI coach Laura Kerr has revealed how Ciara's mum travelled to Belfast's Shankill Road to buy a flag for Team NI just days before they for the Commonwealth Games in Australia in 2018. On Twitter she told how the flag had since been looked after by Athletics NI's Tom Reynolds.