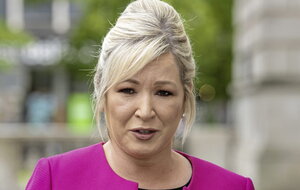 With the possibility of another election looming early in the new year, first minister-in-waiting Michelle O'Neill and colleagues will be buoyed by the results of the latest Institute of Irish Studies-University of Liverpool/The Irish News survey, which indicates the party could secure more than 30 per cent of the popular vote for the first time ever.

Sinn Féin enjoyed a record-breaking performance in May's Stormont election, securing 29 per cent of first preference votes. The poll published today gives the party a share of 30.9 per cent.

Support for the DUP has ebbed slightly since May to 20.1 per cent, according to the survey, leaving Sir Jeffrey Donaldson's party languishing more than 10 points behind its republican rival.

The results suggest that the transformation in regional politics witnessed at the polls in May is bedding in and was by no means a flash in the pan.

The growth in support for Alliance continues, according to the poll, with Naomi Long's party having a 15.3 per cent vote share, almost two full percentage points up on its showing two months ago.

Conducted between June 28 and July 10, and with margin of error of 3.1 per cent, the poll suggests a modest increase in support for the SDLP, which had a disastrous assembly election, losing four seats, including that of the then infrastructure minister Nichola Mallon.

The survey gives Colum Eastwood's party a 10 per cent vote share, a 0.8 point improvement on the assembly election result.

Support for the Ulster Unionists has fallen from May's 11.2 per cent showing in the polls to 9.6 per cent in the survey.

The TUV has seen a significant slide in its vote share based on today's poll, dropping from 7.6 per cent in the assembly election to 4.7 per cent in the survey – by far the greatest change in fortunes since May 5.

Support for the Greens, which lost both its assembly seats in May, increases by 0.9 points to 2.8 per cent.

Professor Peter Shirlow of the Institute of Irish Studies said the survey results tend to reflect the trends in May's election.

"The two parties that did best in May, Sinn Féin and Alliance, are still growing in terms of potential support – the former probably growing due to Michelle O'Neill not being appointed first minister and the latter gaining recognition as electable," he said.

"The lesson from May is that pro-union voters are not simply going to vote to keep the other side out.

"Sections within that community want a leadership for the 21st century that involves socially liberal values, delivery of better public services and more thoughtful ways to resolve the protocol. Sinn Féin have little to do but let unionism divide."