David McCann: No sign of buyer's remorse among voters 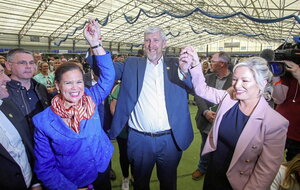 WE are 80 days from the assembly election that re-ordered our five main parties.

With no functioning executive, the only sight of our assembly that the public has been able to watch are the scenes of recall sittings that simply produce the same circular arguments.

Normally when our politics appears not to work, we see voters directing their anger towards the big two – the DUP and Sinn Féin. Mixed in with speculation about a possible early election as soon as January 2023, voters could be asked to give another verdict on our political situation.

Yet with the big swings that the election on May 5 produced, the Institute of Irish Studies-University of Liverpool/The Irish News poll is not showing any signs of buyer’s remorse for those parties who did well at the assembly election.

Let’s start with the big winners of the election, Sinn Féin, who are polling at just under 31 per cent in this survey. It’s not often that the party polls this highly in the north, but it does indicate that the moves forward that Sinn Féin made in May are being consolidated in the early days of this mandate. This score will give Michelle O’Neill and her team confidence that the “first minister for all” strategy is continuing to work with the public.

There is also some good news for Jeffrey Donaldson and the DUP. Whilst the party is still behind Sinn Féin, there is evidence that it has consolidated its position from the election and is still more than double digits ahead of its main rivals within unionism.

The party still has some work to do to win back the support it has lost from previous elections, but will be happy that it is still the only party being seen as a serious contender to lead unionism.

For the other big winners in May, it’s all upside. Alliance polling at just over 15 per cent shows that the new voters that have flocked to it since 2019 are holding even after the party gained nine extra assembly seats.

Many of the party’s gains were close-run contests in places such as North Antrim and Upper Bann. This strong rating will give some of the new faces in the assembly team confidence, as Alliance has got out of the habit of having to fight marginal seats in recent elections.

The parties who suffered in May are no further forward since the election.

The UUP is down to under 10 per cent, which would worry many of its council candidates who are set to face the electorate in 2023. The party is currently polling more than four percentage points lower than it received at the last local elections. If that doesn’t improve, it will see its strong council base heavily depleted next year.

For the SDLP, the 10 per cent rating won’t give it much comfort. It lost the most from the big five in May and despite shock losses of big names like Nichola Mallon, voters do not seem to be returning. Like the UUP, the party is still vulnerable to electoral tests that are less than a year away. If a snap election were held, the SDLP faces the possibility of falling back further to six or seven seats.

As we look toward attempting to get the executive restored, this poll shows the three largest parties in a strong position to enter government.

For the UUP, Doug Beattie will need to seriously examine going into opposition. The pandemic is yielding no increase in support for anyone other than Robin Swann and the party cannot rebuild tied to decisions that it has little control over.

The voters made the SDLP's decision for them – it will be hoping for a clear run to rebuild and develop a narrative that can resonate with voters. However, having its top two performers at Westminster and not at Stormont is still a problem for the party and if we have restored institutions, the focus will quickly revert to Belfast.

On May 5, the electorate voted for a three-party state and nearly three months on this poll shows they are comfortable with the choice they made for now.

Local elections are less than a year away, with the potential for a snap assembly and general election thrown into the mix.

Whilst this may be a dream for electoral nerds like me, for the parties here, it will put all the leaders to the test.