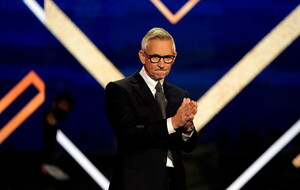 STEPHEN Nolan is among the BBC’s top five biggest earners.

However, the radio and television presenter's pay may vary each year depending on when he is actually paid by the BBC for programmes he has presented.

The salaries were revealed in the BBC's annual report, which gives the pay details of its top earning presenters and other staff who earn more than £150,000 from the licence fee in the year.

Gary Lineker is the BBC's top earning on-air talent for the fifth consecutive year and the only name to earn over £1 million annually.