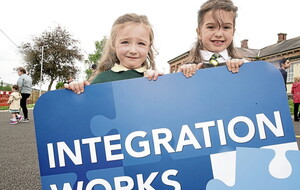 FOUR more schools in Northern Ireland have voted overwhelmingly to begin the process towards integrated education.

St Eugene's in Strabane, Magherafelt Nursery School, St Eugene's Primary in Omagh and Lurgan Model Primary School held parental ballots before the end of term and all came out strongly in favour of making the transition.

No school can become integrated without the consent of a majority of parents by secret ballot.

Lesley Whiteside, principal of Magherafelt Nursery School, said they "look forward to the next steps of our journey towards integration".

"Learning together and understanding each other is central to the inclusive and cross-community learning environment which has been the fabric and culture of our school ethos since opening in 1975," she said.

There will 70 integrated schools in the north by the start of the new term in September.

Tina Merron, chief executive of the Integrated Education Fund, said "this only goes to underline just how much parents want integrated education".

"Recent figures have confirmed that integrated schools are consistently oversubscribed, and we need to work together to deliver an Integrated place for every child that wants one," she said.

Roisin Marshall, chief executive officer of NICIE, said: "This result is a validation of all the insight and hard work of parents, teachers and governors".

The schools will now compile a development proposal and a transformation action plan, which will be submitted to the Department of Education before a final decision is made by the Minister for Education.