A DUP assembly member has defended sharing online an article claiming a gay woman was "rescued" from her sexuality through Christian prayer.

Thomas Buchanan posted on his Facebook page an article entitled, "'It's not gay to straight. It's lost to saved' – One lesbian's journey to salvation'".

It features a video by an American evangelical group in which a young woman claims she spent years living as a lesbian before attending weekly bible study.

The 'Godinterest' website article describes it as a "powerful story of a young woman explaining how God rescued her from a life of same-sex attraction".

But the DUP West Tyrone MLA, a Free Presbyterian, said he could not understand how sharing the article would cause offence.

"What this was, this was a young girl who had put up her testimony about how she had found faith in the Lord Jesus Christ her saviour and had turned from her sin and now has followed in the way of Christ," he said.

"Now that applies to everyone, because everyone in this world is born into sin and everyone requires saving."

He added: "I can't see how that by me sharing her story is homophobic."

She was elected to Antrim and Newtownabbey council in a move being seen as a significant step for the DUP, a party with a history of hostility towards LGBT people.

Mr Buchanan repeatedly refused to say whether or not he supports the party having an openly gay politician.

Instead, he continued to say in response that the "DUP policy hasn't changed" in relation to its opposition to same-sex marriage.

In 2013, Mr Buchanan faced criticism after telling a group of secondary school pupils in Omagh that homosexuality is "an abomination".

The Rainbow Project's Gavin Boyd said: "We condemn, in the strongest terms, all forms of conversion therapy as a particularly cruel form of quackery which is peddled to some of the most vulnerable and isolated members of our community.

"Thomas Buchanan has form for promoting homophobia over the course of his political career, as have many of his party colleagues, but this really is a new low.

"So-called conversion therapies do not work. They are unethical and dangerous, which is why every reputable psychiatric, psychotherapy, counselling and mental health body in the world condemns these practices.

"We will continue to stand opposed to the promotion of these practices and will continue campaigning for them to be banned in Northern Ireland." 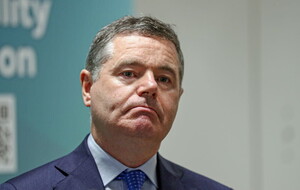