There was unionist anger at the signing of the Anglo-Irish Agreement at Hillsborough Castle between Margaret Thatcher and Garret FitzGerald.

AS MPs met to debate the Brexit withdrawal deal yesterday, comparisons were drawn between unionist reaction to the proposals and Anglo-Irish Agreement, signed by British Prime Minister Margaret Thatcher and Taoiseach Garret FitzGerald, 33 years ago to the day.

The agreement gave the Irish government an official, consultative role in Northern Ireland's affairs for the first time, which like the proposed Brexit bill, was met with unionist fury.

Fianna Fáil leader Charles Haughey claimed the agreement was in conflict with the Constitution of Ireland because it officially recognised British jurisdiction in the north.

A campaign against the treaty, led by the UUP and DUP, included strikes, civil disobedience and mass resignations from the House of Commons.

DUP MP Ian Paisley yesterday told the Irish News there were similarities between that time and the current Brexit crisis.

"Back then we were on the edge of the union, there were major atrocities ongoing and all of that was feeding into the mood," he said.

"However, I do think in terms of relations with the Republic of Ireland we are in similar territory, largely because Leo Varadkar has changed the dynamic, he has ostracised and angered unionists to a similar level.

"Enda Kenny forged positive relationships, Leo and (Simon) Coveney (Tánaiste) on the other hand have managed to create angst, and that wasn't and hasn't been the case for many years.

"That makes it similar politically, in that Dublin is acting as the enemy instead of a passive neighbour, but we must always remember this is a political crisis not a security one which is what we had back then." 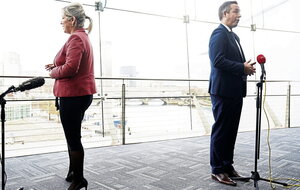