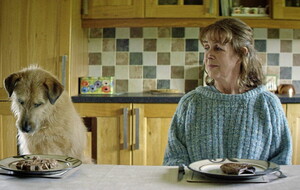 Seamus McAindreasa (53) is a community outreach worker on Raidió Failte and has just joined forces with Film Hub NI to launch the tour of their first Irish language film, Róise & Frank.

At the moment, it's difficult as I am working on Saturdays running a course with Ulster University about Chinese language and culture. As an Irish speaking community, we wanted to look at other, non-indigenous languages. We first looked at Korean, working with the embassy in London. We marked the 25th anniversary of the Korean war and had a concert of folk song, the Arirang, in the Linen Hall Library. It's a folk song and became their unification song, sung by guerrillas. It's great that Irish is having a resurgence. I'm the product of that as my parents met at Irish classes in Belfast, and founded the first Irish language school on Shore Road.

Playing outside our house. After the houses were built, the earth was left in mounds that we called 'the hills'. We'd build huts and tunnel through them. I was born the year the Troubles started so growing up was coloured by that. Later, I'd go to see bands in the Ulster Hall: Motorhead, Thin Lizzy (we met Phil Lynott, who was a nice guy), Rory Gallagher, The Clash.

Is there a must-listen radio programme or podcast?

I listen to our radio station and co-present The Ballroom of Romance from 9pm on Saturday, with everything from cheesy songs to Irish numbers and 80s and 90s nightclub music. We cover Dolly Parton to the Prodigy and AC/DC.

Do you have a must-watch TV programme or Netflix?

I'm a huge Star trek fan, and am enjoying the new series of Strange New Worlds on TV.

I was brought up Catholic. Sunday now is quite busy with a two-year-old step-grandson, Liam, running around. And I love cooking: according to my three children, my best dishes are chilli con carne, stew, steak and vegetable pie and a wee roast chicken.

Do you have a favourite eatery or is it a takeaway?

We're not foodies - what's the point in going out with my cooking? - but like the old school Villa Italia.

What do you feel on Sunday night about Monday morning?

I am lucky in that I enjoy what I do and have been a community worker for 25 years.

Róise & Frank, an award-winning love story written and directed by Rachael Moriarty and Peter Murphy, is being shown at venues across Northern Ireland. For details, visit filmhubni.org

TV review: Wirecard a tale of international espionage worthy of the Bourne series