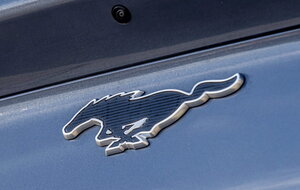 ALONG with 'legend', 'literally' and 'unprecedented' - and I'm sure you can think of others - 'iconic' is one of those words that gets bandied around with such frequency that it has become unmoored from its proper meaning, writes William Scholes.

Language changes over time, I suppose, even if some of us don't like it. And so it is with icons. For me, the Ford Mustang is one of a handful of bona fide motoring icons, a legend (ahem...) that can take its place alongside a very select bunch that also includes the Range Rover and Porsche 911.

Longevity - the Mustang model line dates back to 1965 - and careful evolution over the decades are among the reasons the Pony Car continues to endure.

Nor has an indelible connection with Steve McQueen - a Hollywood legend and icon if ever there was one - harmed the Mustang's reputation.

In 1968's Bullitt, McQueen's taciturn San Francisco detective Frank Bullitt drove a Ford Mustang GT - painted Highland Green and with a rumbling 390-cubic inch V8 lump of muscle under the hood - as he duelled with the bad guys, who were in an almost-as-fabulous Dodge Charger R/T.

Even though I've seen it umpteen times, Bullitt's 11-minute rollercoaster ride of a car chase remains a visceral thrill.

More than 50 years on, that marriage of McQueen and Mustang remains the benchmark by which all other movie car chases are judged.

Steven Spielberg, no less, is working on a new Bullitt film, with Bradley Cooper cast in the role of Steve McQueen/Frank Bullitt. There's not a lot known about it, but rumours suggest it will be a continuation story rather than a remake.

Would a 21st century Detective Lieutenant Frank Bullitt still drive a Ford Mustang? Quite possibly, but that's no longer as straightforward as it was in the Sixties because today Ford offers two quite distinct Mustang models.

You can still get the proper petrol-fuelled coupe and convertible Mustang - in fact, an all-new model is due to launch next summer - but now you can also get an all-electric Mustang, called the Mach-E.

This, as you can tell from the pictures on this page, isn't a sports car, although it should be said it's pretty quick and you can get versions that accelerate appreciably quicker than McQueen's steed.

Instead, the Mustang Mach-E is a sort of large five-door hatchback-meets-SUV. It is interesting that Ford, for its first bespoke EV, has raided the Mustang's near-60 years of heritage for a very different style of vehicle. There are almost no Ford logos to be seen anywhere.

The move from internal combustion to kilowatts and volts has created some interesting shifts in the motor industry already - the rise of Tesla and South Korean brands Hyundai and Kia besting Volkswagen's EV efforts, for example - but the demise of the Ford Fiesta and the arrival of an electric Mustang probably weren't among the more easily predictable changes.

Electric cars, as you may have noticed, tend to be expensive. Entry to Mach-E ownership starts at just under £51k, which is expensive for a Ford, even one as talented as this...

That gets you 'Select' trim with a 75kWh battery (70kWh of which Ford classes as 'useable') paired with a 265bhp electric motor with a chunky 317lb ft of torque. This rear-wheel-drive so-called standard range set-up yields a range of 273 miles on the WLTP combined cycle test.

As is the way with electric cars, paying more money for your Mach-E gets you a bigger battery and greater range.

Give the dealer £59,300 and you can get a Mach-E 'Premium' with an 'extended range' 98kWh battery (91kWh useable). This version is still rear-wheel-drive and gets a more powerful motor, with 290bhp, and the same 317lb ft as the standard-range model. Range is an impressive 372 miles.

Add another £6k and, in return for £65,325, an all-wheel-drive Premium can be yours. This is a dual-motor car, with a step up in power and torque, to 346bhp and 428lb ft respectively. Range falls a little from the single-motor extended range model, to a still-handy 341 miles.

At the top of the Mach-E tree is the £74,460 GT. It has the big battery and all-wheel-drive dual-motor drivetrain, with the power turned up to 480bhp and torque to a colossal 634lb ft. All that performance comes at the expense of range, which falls to 304 miles.

Top speed is pegged at 111mph for all versions apart from the GT, which is allowed to stretch its legs to 124mph. Ford gives two sets of acceleration times for the 0-62mph sprint, with standing start and rolling start figures. The standard range car takes 6.9 seconds/6.1 seconds, the rear-wheel-drive extended range Mach-E 7.0 seconds/6.2 seconds, the all-wheel-drive extended range 5.8 seconds/5.1 seconds, and the GT a buttock-clenching 4.4 seconds/3.7 seconds.

Suffice it to say, in everyday driving no version of the Mustang Mach-E ever feels what you could call 'slow'. It doesn't launch itself forward with the eagerness of a Tesla Model 3 or Model Y, but the performance is there if you dip the throttle pedal more keenly. I reckon it's a sensible arrangement, prioritising a gentler range-saving form of acceleration over the temptation to take off like a scalded cat.

It's nice to drive too, which is not always a given with an EV, no matter what story its performance figures might tell. The Mach-E's steering is accurate, and although the ride can feel a bit firm at lower speeds it settles down when you're on the move. The heavy battery is located under the floor, low down between the axles, so although this family car weighs two tonnes it never really feels it as you tackle twisting, undulating roads.

The interior makes is spacious and bright, the seats comfortable and the quality of the fixtures and fittings probably just about decent enough for you not to feel short-changed by the ambience of your £50-60k Ford. It's no Volvo or Audi in here, and indicator stalks from a Ford Fiesta seem a little incongruous in this future-first range-topper.

The most striking element of the cabin is the large digital screen in the middle of the minimalist dashboard, mounted portrait-style a la Tesla and Volvo. Almost everything is controlled via this screen, and thankfully it's easily read, intuitive to operate and quick to respond. I'd still prefer more hard buttons and knobs, but that feels like a losing battle. In front of the driver is a much smaller though well-sized landscape-orientated screen which carries the stuff you really need to know, such as speed and range. And of course, both screens can be configured to carry various combinations of information.

There's a nice strip of what appears to be tweed cloth covering the dashboard; I'd have liked to see more of this in the interior, to be honest.

Kudos to Ford for giving the Mustang a useful space under the bonnet to store the charging cables. It is frustrating that many EV makers (step forward Volkswagen, Peugeot, Vauxhall, Skoda...) think that storing the cables in the boot or - worse - under the boot floor is a good idea. Ideally you want to keep those mucky cables away from your luggage... The Mach-E's 'frunk' also has the same drain hole arrangement that you can find in the boot of a Ford Puma, meaning it can be cleaned out if it gets dirty.

So the Mustang Mach-E is practical, nice to drive, well screwed together (it's built in Mexico) and has genuinely useful range. There's no doubt it's expensive for a Ford, which perhaps goes a long way to explaining why it's liberally badged as a 'Mustang', a nameplate which carries more exclusivity and prestige than a Fiesta or Focus, in spite of their manifest qualities.

Whether or not the Mach-E is an authentic Mustang is one of those questions that will be endlessly debated, in the same way that people still argue that BMW's reinvention of the Mini is a betrayal of the 1959 original and Land Rover shouldn't have dared re-use the Defender name.

The fact that the Mustang Mach-E can elicit strong feelings also puts it in a different category to the many other EVs which in essence are soulless fun-soaks. The Mach-E may conceptually be no different from, say, a VW ID4 or a Skoda Enyaq but it does provoke an emotional response. Plus, no other EV lets you imagine you're Frank Bullitt, prowling the mean streets in search of bad guys - even if you're only chasing down the last available charging point in Enniskillen before the villain in the Tesla Model 3 gets there...

A mini Mille Miglia in March