The latest Kia Sportage is a well built, sophisticated and extremely accomplished family car, with an on-trend hybrid drivetrain as good as you'll find anywhere and the assurance of a seven-year warranty. There's a lot to like here, says William Scholes 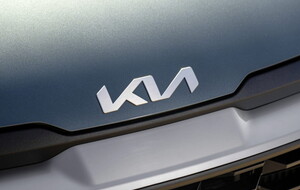 Kia has plenty to boast about these days - thus the bold new logo
WHEN South Korean manufacturer Kia landed on our shores in 1991, it headed straight to the bargain bin corner of the new car market without passing 'Go', writes William Scholes.
The cars were cheap, though not necessarily that cheerful, and they even let you drive away in one in exchange for a £1 deposit.

Kia had a plan, however, to get bigger, better, more serious and credible. Fast-forward to today, and it is firmly in the mainstream, with a tremendous range of family cars. They are well built, with most of the models on our roads coming from a high-tech factory in Slovakia characterised by - at least when I visited a few years ago - the same sort of fastidious attention to detail and cleanliness that you might find in a hospital operating theatre.

The cars come with a seven-year warranty - beat that - and are good to drive, easy to live with, value for money and good to look at. What's not to like?

I can remember executives from European car companies being a bit sniffy about Kia, making comments along the lines of, "OK, the cars are well put together and affordable, but the engines and gearboxes will never be as good as ours."

Opinions like that haven't aged well. And while there's not much to choose between the petrol and diesel drivetrains offered today by Kia and its Hyundai parent and those of longer-established European brands, the South Koreans have stolen a lead when it comes to electric cars.

Every car-maker has landmark models in its history - the Beetle and Golf for Volkswagen, for example - and Kia is no different.

The first Ceed of 2006 was a rather dull and conventional family hatchback but its importance lay in the fact that it was not only built in Europe but also emphatically European in how it was conceived and designed.

But the car that really propelled Kia to mainstream respectability - desirability, even - was the 2010 Sportage.

It was the right car at the right time; a great looking family car, perfectly positioned to catch a chunk of the burgeoning SUV market.

That car's replacement, which we got in 2016, didn't look quite as sharp but was a more upmarket vehicle.

It still sold like hot cakes, and though in Northern Ireland we seem to prefer the closely related Hyundai Tucson, the Sportage is a fixture in the top 10 best-seller chart.

Now there's a new Sportage. It's an improvement over its accomplished predecessor in every way and goes straight to the top of the family SUV class; anyone in the market for a car of this sort should give the Kia very serious consideration indeed.

It won't be to everyone's taste, but the Sportage has a distinctive front-end.

You will, however, have to form a view on one of the most distinctive front-ends out there. A large grille framed by boomerang-shaped LED lights give the Sportage an unmistakable identity, but it won't be to everyone's taste. The rear is probably the car's most pleasing aspect, and a chunkily proportioned side profile is enlivened by numerous creases.

Hyundai adopted a similar approach with its latest Tucson, but the Sportage is, to my eyes, the more successful design. They haven't attempted to do a conventionally handsome car - it's no Mazda or Alfa Romeo - but it is distinctive and modern, and bestows the Sportage with a strong identity. It certainly makes it stand out in a highly competitive market awash with same-again, derivative designs from Ford, Volkswagen, Nissan, Skoda and others.

The interior is a highlight. It's notably spacious, comfortable and solidly screwed together, with a high-tech sheen courtesy of a dashboard dominated by two large 12.3-inch digital screens which sweep from in front of the driver to the middle of the car.

As ever, I'd prefer to have actual buttons to press and knobs to turn to work the heating system instead of a touchscreen, no matter how effective. But the screens are responsive and clear, and can be configured in various ways to show the information you prefer.

There's a row of short-cut touch-sensitive buttons under the central screen; their functions change from heating controls to radio and media by pressing a button. This sounds fiddly but even I quickly found it second nature.

The Sportage offers a very pleasant, high-tech but easy to operate, environment for the driver.
The stereo is a really high quality item, with impressively clear and defined sound, and the infotainment system has Kia's trademark ease-of-set-up.
There's plenty of space up front and back seat passengers are also well catered for. There are big door pockets and a glove box in which you could actually fit several pairs of gloves.
Roomy, comfortable, well equipped and solidly built: the Sportage makes a strong impression as soon as you open the front door

The Sportage does lack, however, some of the flexibility you'll find in other family SUVs. So while the back seats can recline, they don't slide backwards and forwards (as in a Ford Kuga, for example) and nor can they be removed altogether to create a mini-van (like the Skoda Karoq). It's hard to think of too many cases where this would be a deal-breaker, though.

Back seat passengers get plenty of room for in the Sportage
The Sportage's boot is large, though ultimate capacity depends on what flavour of hybrid a particular model is. The back seat folds in a useful 40/20/40 format.

The back seat does have a 40/20/40 split, which is useful, and the boot is very large. Volumes vary a little depending on engine choice and the size of the hybrid system's battery, but are up to 591 litres with the back seat in place and 1,780 litres with the seats folded.

The Sportage is another new car that doesn't have a spare wheel - something which really annoys some readers.

Trims follow Kia's traditional pattern, starting with a '2' model and rising to GT-Line S via GT-Line, '3' and '4'. Equipment levels are generous, and there's a bunch of safety kit on all models too. The Sportage has a full five-star Euro NCAP safety rating.

The Kia Sportage is a great all-round family car

The petrol unit and a beefier diesel engine (134bhp/236lb ft) can be had with a 48-volt mild-hybrid system and seven-speed automatic gearbox, which also brings the possibility of specifying your Sportage with all-wheel-drive.

A 'self-charging' petrol-electric hybrid gets a 226bhp/258lb ft drivetrain, while the plug-in hybrid is more powerful again, with 261bhp, and an official electric-only range of 43 miles from its 13.8 kWh battery.

I tested the range-topping GT-Line S model with the front-wheel-drive hybrid drivetrain. It's as smooth and responsive as the best of these set-ups, smoothly switching between battery and petrol power.

But like many hybrids, the Sportage doesn't feel the lightest on its toes (kerb weight is 1,649kg) and doesn't offer keener drivers much enjoyment, beyond the addictive little burst of electrically-assisted acceleration from a standstill and low speeds. Lean too hard on the throttle and you will get a noisy flare of revs as you accelerate and the car summons all it can from the electric motor and petrol engine.

And while the Sportage doesn't have the vim and verve of a Mazda CX-5 on a back road, there is plenty of grip and decent steering. The Kia's general refinement makes it a strong motorway car. It's comfortable too, which is just as it should be given the Sportage's family focus.

Prices start at £27,750 for a petrol in '2' trim, rising to £41,500 for the loaded-with-the-kitchen-sink GT-Line S hybrid with all-wheel-drive (plug-in hybrid prices aren't available on Kia's website at the time of publication, but were around £3,500 higher than the relative self-charging hybrid when last on the price lists). The '3' trim, at around £36k, seems to be the sweet spot in the range.

Its eye-catching styling will be a big draw for some customers, though will likely dissuade others. Those who like the looks will find a well built, sophisticated and extremely accomplished family car, with an on-trend hybrid drivetrain as good as you'll find anywhere and the assurance of a seven-year warranty.

Were I in the market for a new family car, I'd find it hard to go past the Sportage. It comes highly recommended, and is yet more evidence that Kia keeps on making a splash.

The latest Kia Sportage is making a splash

Benefit in kind: 31 per cent

A hugely historic BMW M1 is up for auction