Contractors boarded up the windows of homes close to a contentious bonfire in Ravenscroft Avenue/Bloomfield Walkway bonfire in east Belfast. Picture by Hugh Russell

The amount of dangerous air pollution over Belfast during bonfire night was more than double internationally accepted levels.

Over a period of more than six hours, monitors recorded how the amount of potentially lethal fine particulates soared - raising concerns about health effects on the young, old, vulnerable and sick.

Data from across the city, where dozens of huge bonfires were lit on Tuesday night, revealed pollutants known as PM2.5 - about one fortieth the width of a human hair - were four or five times the levels normally seen in the city.

The pollution began to rise after 10pm and peaked at midnight before dropping and peaking again at 6am on Wednesday.

Video: Dial down the rhetoric about bonfires, says Arlene Foster

Dr Liz Coleman, from NUI Galway's School of Physics and Centre for Climate and Air Pollution Studies, said PM2.5 was recorded at levels more than twice the limit recommended by the World Health Organisation (WHO).

"Some problems associated with PM2.5 are lung problems, cardiovascular problems and recent studies link exposure to fine particles to dementia," she said.

"Obviously, health effects are more severe in vulnerable groups, the very old and very young and those with pre-existing conditions."

Contractors boarded up the windows of homes close to a contentious bonfire in Ravenscroft Avenue/Bloomfield Walkway bonfire in east Belfast. Picture by Hugh Russell

The UK's Department for Environment, Food and Rural Affairs states that there is no safe level for this type of pollution.

It warns that long-term exposure is the biggest issue but high concentrations over a short period can exacerbate lung and heart conditions, significantly affecting quality of life, and increase deaths and hospital admissions.

Air quality is monitored at seven locations in greater Belfast.

The Northern Ireland Fire and Rescue Service said this morning it had dealt with 40 bonfire incidents during Eleventh night and during the busiest period the regional control centre handled an emergency 999 call every minute.

In Belfast firefighters doused at-risk buildings with water in an effort to keep them cool as the fires raged nearby. The NIFRS said its two most significant bonfire incidents were in the greater Belfast area. The service also reported one attack on a fire appliance during the night - though no-one was injured.

Firefighters dampen homes as a nearby bonfire at Ravenscroft Avenue in east Belfast is lit. Picture by PA Wire 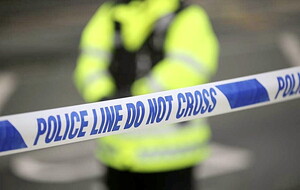