Ron Howard's incredible retelling of the Tham Luang cave rescue showcases the limitlessness of the human spirit. Gemma Dunn dives in to find out more... 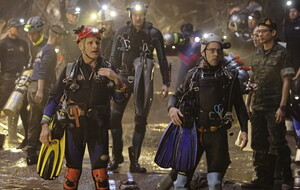 BETWEEN Apollo 13 and Thirteen Lives, you'd be forgiven for thinking Ron Howard has a penchant for a certain “unlucky” number. Yet there's nothing ill-fated about his movies.

In fact, the multiple Academy Award-winning filmmaker (68), is one of this generation's most popular directors.

From critically acclaimed dramas A Beautiful Mind and Apollo 13 to comedies Parenthood and Splash, he has created, and once starred in, some of Hollywood's most memorable hits.

The latest title to receive his Midas touch is the aforementioned Thirteen Lives: a nail-biting retelling of the real-life Tham Luang cave rescue that took place in northern Thailand in 2018.

As a documentarian, Howard, who in recent years has made films about opera legend Luciano Pavarotti and World Central Kitchen founder Jose Andres, was instantly sold on the script.

“I've made a number of movies over the years based on real events, and this film was one where I wanted to be as journalistic about the story as I possibly could be,” he recalls, keen to “understand the story behind the headlines”.

“In Thirteen Lives, I felt like the suspense, emotion, drama, and spirit of authenticity was going to exist within the details.

“I wanted to convey these moments in a powerful but fundamentally authentic way.”

The survival drama, streaming on Prime Video, recounts the tremendous global effort to rescue a Thai soccer team who become trapped in the cave network during an unexpected rainstorm.

Faced with insurmountable odds, a team of the world's most skilled and experienced divers — uniquely able to navigate the maze of flooded, narrow cave tunnels, joined with Thai forces and more than 10,000 volunteers to attempt a harrowing rescue of the 12 boys and their coach.

“There were so many people putting themselves at risk, and placing themselves in positions of real emotional vulnerability, to save those 13 people,” reasons Oklahoman Howard, who worked alongside Thai co-producers, consultants, cast and crew on the feature.

“I'm not just talking about the divers, or about the people who were clinging to the sides of cliffs to try to look for sinkholes, or the people figuring out water diversion projects.

“I'm talking about the people who were making the operation run, who were working around the clock to feed people, to make the caves accessible despite the coming rains,” he adds.

“The fact is, none of it could have happened if all of it hadn't happened.”

It was a story that gripped the globe, as park rangers and Thailand's Navy SEALs kicked off an against-all-odds rescue mission that would culminate in an international effort.

Rescue divers Rick Stanton (played by Viggo Mortensen) and John Volanthen (Clin Farrell), who had experience diving where no-one else had, flew in to join volunteers.

“When I heard it was the story of the rescue, I recalled it of course, but really it was Ron more than anything that drew me to the film,” says Farrell (46), who like his co-stars learned to cave dive for the role.

“The film is a history of what happened. The story is very real and very profound. Ron is always fascinated in the human issues at the centre of a story,” notes The Batman actor.

The visceral experience of following the actual events informed Edgerton's reading of the script as well. “The day that the kids went missing just happened to be on my birthday, June 23,” remembers the now-43-year-old.

“It was 2018, and I remember watching the news, and I recall the compassion and courage of the 10,000 volunteers as the whole world hoped for the best.”

As for his character's involvement, “There's one key thing which I don't really want to spoil for anyone who is not aware of it,” teases the Obi-Wan Kenobi star.

“About how the boys were extracted from the cave and how the rescue took place, which was kept out of the public eye for a reason…

“I felt for Harry; he's such a sensitive human being and the weight of the world's hopes and expectations were then placed on his shoulders,” he follows.

“I get emotional thinking about it. I can't imagine what that would have felt like for him.

“I'm so happy that the result was positive because he feels things so deeply and cares so much about things, that I wonder how that would have impacted the rest of his life.”

“There's an interesting moment in the film where John asks the name of one of the boys he is taking out,” joins in Bateman (33), recently seen in Kenneth Branagh's Death On The Nile.

“I remember asking Chris about this and he said he didn't want to know the name because it would make them too human.

“He said, ‘I wouldn't be able to focus; I had to see it as an exercise of getting it done',” he recites.

“It sounds counterintuitive, to almost dehumanise the boys in order to save them, but it was loads of those decisions being made.”

It's a story of cooperation, humanity, and the power of expertise under pressure.

“And what better time to show a movie that encourages compassion and unity, say all involved?

“I think this movie shows that, at our core as a species on the planet, as human species, we are filled with an empathetic spirit, at the best of times, and at the worst of times,” Egerton muses.

“It's really good to remind ourselves that, as much as we live our lives selfishly, for the most part, when the right situation happens, the most extraordinary things come out of us.

“And we are able to join together and solve problems together.

“I think it's such a special reminder of who we can be.”

“My grandmother used to say, ‘If you're feeling sad, do something to someone else',” shares Bateman.

“And it's amazing, the thing that it does to you, remembering there's light and beauty and hope in the world. I think that's what this story is.”

“This story, what was achieved, is an object lesson in what is possible when people are willing to take risks, when they're willing to unify, they're willing to put national pride and politics and other petty issues aside, and just get to the bottom line of problem solving,” Howard concludes, admitting this film “is up there” amongst the most challenging asks of his career.

“Meeting in the middle to get a thing done: it's a lesson I hope people can take away from seeing the film.”