Michael Palin on North Korea: You can't condemn a whole nation for their leaders

Michael Palin might have a lengthy showbiz career under his belt – but there's plenty more to come, starting with another of his much-loved travelogues. He tells Gemma Dunn that at 75 he still has a lot to learn MICHAEL Palin may have travelled around the world in 80 days – but his latest journey is set to be his most "revealing" yet.

The comedy actor-turned-presenter – who forged a successful second career touring the world following the 1989 hit – will head to North Korea for his first travelogue since 2012.

The major two-part documentary – his first for Channel 5 – will see him go "beyond the politics" in a bid to discover more about the everyday life of the secretive nation.

It was an opportunity Palin (75) simply couldn't turn down.

"I like places that are off the beaten track," begins the former Monty Python stalwart, whose previous travel series include Pole To Pole, Hemingway Adventure, Full Circle and Brazil – the latter not to be confused with the 1985 sci-fi film of that name in which Palin starred, along with Robert de Niro and Bob Hoskins.

"Especially places that have a reputation, where you want to find out what it's really like under the surface.

"You can't condemn a whole nation for the aggression or cruelty of their leaders," he insists. "People are people, so I wanted to try and find out if that was the same for North Korea."

But gaining unprecedented access was no easy feat for a Western crew – rather the result of two years of complex negotiations.

"Before Christmas, I just thought, 'This will never happen' because [the political leaders] were all calling each other names," Palin recalls.

"And then after Kim Jong-un made the new year speech, which was conciliatory towards South Korea, talking about reunification, the whole atmosphere changed," he explains.

"That was when we realised that we were on the crest of a wave and we were likely to be able to begin – but you just never knew what could happen. One morning there could have been a missile fired; Trump could have said something and we'd all be held hostage or we wouldn't be able to go at all. So the whole thing kept me very apprehensive."

It was a case of proving he could be trusted, Sheffield native Palin says.

"Here's a country that looks similar to countries I've been to – they have tall buildings, railway lines and roads, although very little on them. And yet something was very different."

With the 1,300-mile, 13-day trip coinciding with the historic meeting between Kim Jong-un and the South's president Moon Jae-in too, Palin found himself filming at a critical time in the country's history.

"You suddenly realise that they're all Koreans and they've been Koreans for a thousand, two thousand years," he says of the reaction. "They've only been separated for 70 years, so they see themselves as the same people, with the same interests.

"It was reunification which excited people because some of them have family who they never see, so this little step towards some kind of peace was hugely important."

It could usher in a new era, he muses: "I get the feeling that [the North Koreans] want to open up to the rest of the world, but they're not quite sure how to do it without losing – I'm talking about the party regime here – control of the country, which they have."

He continues: "We did see sort of tourist resorts and airports being built to deal with the people coming in; they wouldn't have spent that money unless this was a major change of policy."

Can this landmark series enjoy the "Palin effect"? (His previous shows resulted in a spike in tourism for the visited destination.)

"All of us in the crew felt quite sad when it came time to leave and none of us expected that," he confesses. "We all thought we were going to race home, get out of this madness, but actually not. But then we were well looked after."

Does Palin – who has never shied away from adventure – ever have any travel-related worries?

"Some things can come up," he admits. "Like if I got ill or something like that, would I want to be in the middle of the Gobi Desert? And am I taking a risk here if I get on a light plane, that something may happen?

"They don't worry me because I'm absolutely fine with this idiotic optimism I have," he says, with a warm smile.

But Palin, who has three children with his wife, Helen Gibbins adds: "I worry about my family – and I've got four grandchildren now which is lovely, so I don't want to be away from them for too long."

One thing that's sure to keep him on home soil, however, is Monty Python. Are there celebrations under way for 2019 – the 50th anniversary of the sketch show favourite?

"Well, there are plans being hatched to flog our wares – you don't miss an opportunity for an anniversary," he says. "But what the rest of us are going to do, I'm not actually sure at the moment."

It means a lot to him, he says: "There's only six of us that have ever been Pythons, and Graham's gone, Terry [Jones] has got dementia, so there's really only four of us that can discuss it at the moment. It's really quite a bond."

In addition, Palin is currently starring as William Makepeace Thackeray in the ITV adaptation of Vanity Fair – and much to his delight, he's also written a book.

Erebus: The Story Of A Ship brings to life the world and voyages of HMS Erebus – a project that took him to the Falklands, Tasmania and the Northwest Passage, and importantly, gave him time at home.

Can the "national treasure" see himself putting pen to paper again?

"I really get a bit embarrassed about that," he says coyly of the tag. "There's only one thing worse and that's being called 'the nicest man in Britain'.

"[But] yes, we'll see, if something else comes along. I like writing and I enjoy discovering and learning new things. I'm 75 and I'm so ignorant; there's so many things I want to know. It would be terribly sad to feel as though I'd done everything – what is there left in life? 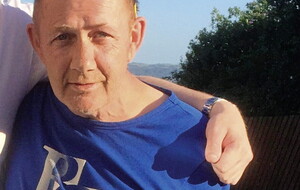