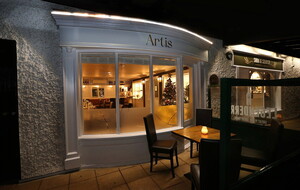 THREE restaurants in Northern Ireland have been added to the prestigious Michelin Guide.

Blank in Belfast, Fontana in Holywood and Artis by Phelim O’Hagan in Derry City, have been named among the Michelin inspectors’ favourite new restaurants for January 2023.

They are among the 24 new inclusions to the guide across Ireland and Britain.

The Bishop’s Buttery in Cashel in Co Tipperary and Terre at the Castlemartyr Resort in Co Cork complete the list of new Irish entries.

“Prime ingredients are the focus at Belfast’s Blank,” state the Michelin inspectors.

“In fact, as the name suggests, there is no menu – everything depends on what’s fresh and in season.

“Fontana in Holywood may have been around for a while but there’s a new lease of life in the kitchen, while great produce is also celebrated in Londonderry’s Craft Village area at Artis by Phelim O'Hagan.”

Opened just 15 months ago by Jonny and Christina Taylor, the pair said the inclusion of Blank in the Michelin Guide was "a true vindication " of their restaurant concept.

"Northern Ireland really is making a mark globally as a high dining destination and I congratulate Fontana and Artis in making the Michelin Guide as well," said Christina.

Turning south, the Michelin inspectors said: “Both restaurants here are hosted by manor houses. The Bishop's Buttery in Cashel celebrates County Tipperary’s produce and is found in the cellars of a house once home to Archbishops.

“Meanwhile, Terre is a thoroughly grand and sophisticated affair located in the main house at the Castlemartyr Resort.”

Visit the Michelin website to explore all local restaurants included in its guide.

The launch of the new Michelin Great Guide Britain & Ireland is set to take place at Silverstone Circuit in Northamptonshire, on Monday March 27.

The ceremony is when new Michelin Stars, Bib Gourmands and Green Stars will be unveiled.