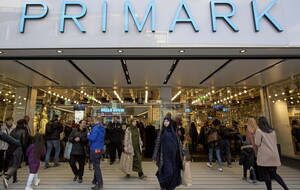 Primark's sales in the UK were up by 15 per cent over the four-month period and the chain's share of the clothing, footwear and accessories market jumped to 7 per cent from 6.5 per cent last year, according to owners ABF

THE owner of Primark has reported a boost in sales, as it said inflation has become less volatile and consumer spending proved to be more resilient than it expected.

Associated British Foods (ABF) saw its group revenues jump by 16 per cent at constant currency rates over the four months to January 7, compared to the same period last year, to £6.7 billion from £5.57 billion.

It boasted record sales at budget fashion chain Primark in the week leading up to Christmas Day, marking a much stronger festive period than the retailer was anticipating.

Sales in the UK were up by 15 per cent over the four-month period and the chain's share of the clothing, footwear and accessories market jumped to 7 per cent from 6.5 per cent last year.

Visitor numbers to stores were strong in major cities as well as on high streets and retail parks, ABF said.

The retailer's main Belfast store at Bank Buildings reopened in November, four years after being gutted in a fire.

The £100 million reconstruction scheme, bringing back 88,200 sq ft of retail space to the city centre, proved a massive footfall driver for the city, with tens of thousands of shoppers flocking into the store in the lead-up to the crucial Christmas trading period.

ABF said Primark also enjoyed a surge in online visitors since improving its website, with UK website traffic jumping by around 85 per cent since last year, with the retailer recently launching a "click and collect" trial of children's products in 25 stores.

The group noted that Primark's low prices were appealing to existing and new customers but that economic conditions could weigh on consumer spending in the months ahead.

Its food business, which includes brands British Sugar, Twinings and Ovaltine, also saw a sales boost but the firm said this was largely achieved by increasing prices to recover significant cost inflation.

Despite sales growth, it also stuck by previous guidance that its full-year adjusted operating profits and earnings would be lower than the previous year.

New beginnings for LRA as it moves to Gasworks office